In a scatter plot that displays many points, it can be important to visualize the density of the points. Scatter plots (indeed, all plots that show individual markers) can suffer from overplotting, which means that the graph does not indicate how many observations are at a specific (x, y) location. You can overcome that problem by moving from a "point plot" to an "area plot" such as a heat map or a contour plot. These plots do a good job communicating density, but they typically do not show individual points, which can be a drawback if you are interested in displaying outliers.

This article shows the following four methods of visualizing the density of bivariate data:

The following SAS DATA step extracts data from the Sashelp.Heart data set and will be used to create all graphs. The data are measurements of the systolic blood pressure (the "top number") and cholesterol levels of 5,057 patients in a heart study. For convenience, the Systolic variable is renamed X and the Cholesterol variable is renamed Y:

Use a heat map to visualize the density

The simplest way to visualize the density of bivariate data is to bin the data and use color to indicate the number of observations in each bin. I've written many articles about how to perform two-dimensional binning in SAS. However, if you only want to visualize the data, you can use the HEATMAP statement in PROC SGPLOT, which automatically bins the data and creates a heat map of the counts: 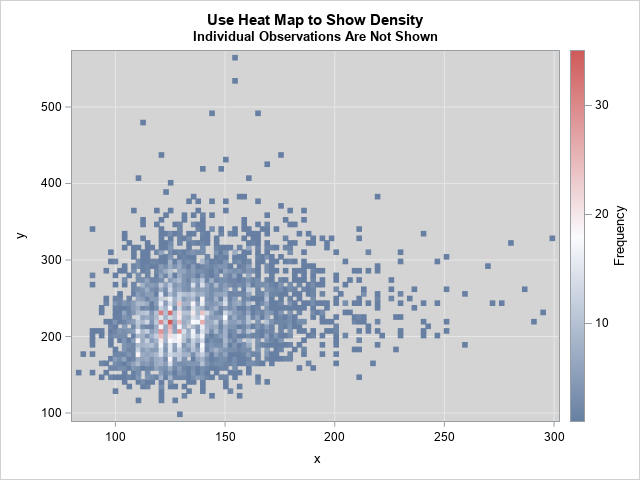 The graph shows that the region that has the highest density is near (x,y) = (125, 225). The pink and red rectangles in the graph contain 20 or more observations. The outliers in the graph are visible.

Because the default color ramp includes white as one of its colors, I changed the color of the background to light gray. You can use the COLORMODEL= option on the HEATMAP statement to define and use other color ramps. (For example, I used a yellow-orange-red color ramp for the image shown to the right. Click to enlarge.) I also used the default binning options for the heat map. You can use the NXBINS= and NYBINS= options to control the number of bins. Alternatively, you can use the XBINSIZE= and YBINSIZE= options to specify the size of the bins in data units.

For large data sets, the default number of bins might be too large. For most data, 200 bins in each direction shows the density on a fine scale, so you can use the options NXBINS=200 NYBINS=200. Of course, you can use smaller numbers (like 50) to visualize the density on a coarser scale.

Use a contour map to visualize the density 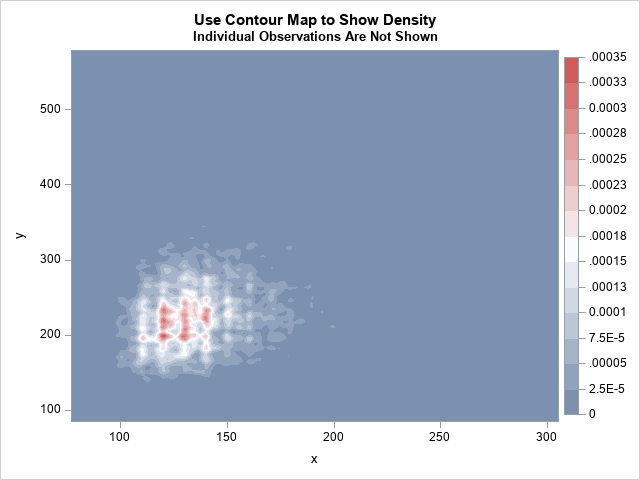 The graph shows the density estimate. Unfortunately, the units of density (proportion of data per square unit) are not intuitive. Notice that individual observations (including outliers) are not visible in the contour plot. To get very small "hot spots," I used the BWM=0.25 to select a small kernel bandwidth. (BWM stands for "bandwidth multiplier.) If you use the default value (BWM=1), you will get one large region of high density instead of several smaller regions. Similarly, the NGRID=250 option computes the KDE on a fine grid. You will probably need to play with the BWM= option to determine which value is best for your needs.

PROC KDE creates the contour plot with a default title, but you can use the ODS Graphics Editor to change the plot title.

Use a scatter plot and transparency to visualize the density

I've previously written about how to use a scatter plot and marker transparency to indicate density. The value for the transparency parameter depends on the data. You might have to experiment with several values (0.75, 0.8, 0.9, ...) until you find the right balance between showing individual observations and showing the density. 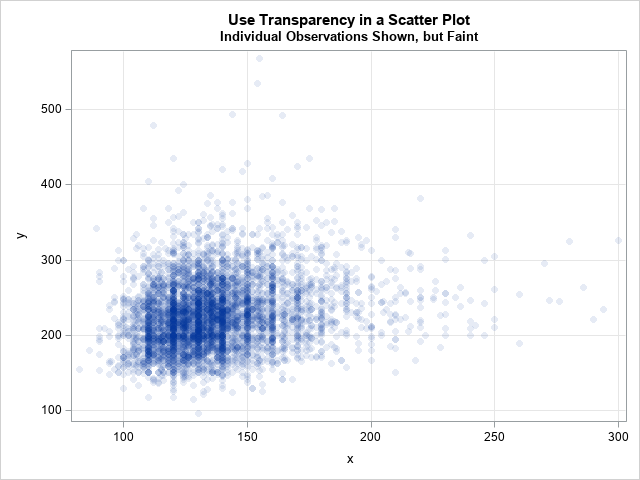 In the scatter plot, you can see that the many data values are rounded to multiples of 5 and 10. You can see clear striations at the values 110, 120, 130, 140, 150, and 160. Recall that the X variable is the systolic blood pressure for patients. Evidentially, there is a tendency to round these numbers to the nearest 5 or 10.

In this plot, you can see the individual outliers, but they are quite faint because the TRANSPARENCY= option is set to 0.9. If you increase the parameter further to 0.95 or higher, it becomes increasingly difficult to see the individual markers. Although you can see that the highest density region in near (x,y) = (125, 225), it is not clear how to associate a number to the density. Does a certain (x,y) value have 10 points overplotted? Or 20? Or 50? It's impossible to tell.

Use a scatter plot and color to visualize the density

The last method borrows ideas from each of the previous methods. I was motivated by some graphs I saw by Lukas Kremer and Simon Anders (2019). My implementation in SAS is quite different from their implementation in R, but their graphs provided the inspiration for my graphs. The idea is to draw a scatter plot where the individual markers are colored according to the density of the region. Kremer and Anders use a count of neighbors that are within a given distance from each point, which is an expensive computation. It occurred to me that you can use a density estimate instead. Because you can compute a KDE by using a fast Fourier transform, it is a much faster computation. In addition, the KDE procedure supports the SCORE statement, which provides a convenient way to associate a density value with every observation. This is implemented in the following statements: 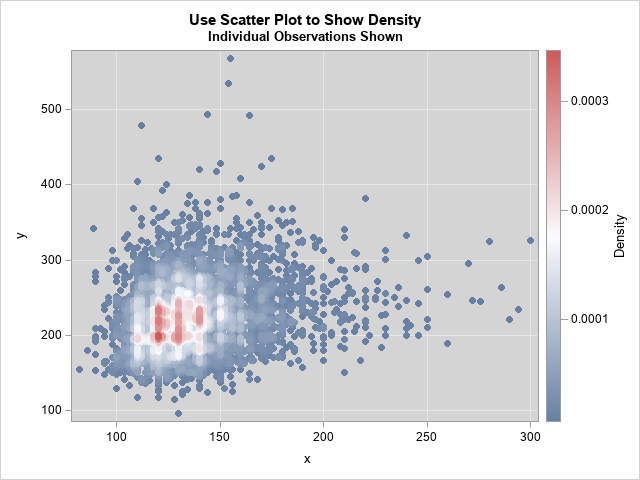 The graph is a fusion of the other three graphs. Visually, it looks very similar to the heat map. However, it uses colors based on a density scale (like the contour plot) and it plots individual markers (like the scatter plot).

In summary, this article shows four ways to visualize the density of bivariate data.

For most situations, I recommend the heat map, although I also like the scatter plot that assigns colors to markers based on density. What are your thoughts? Do you prefer one of these graphs? Or perhaps you prefer a different graph for visualizing the density of bivariate data? Leave a comment.