Last week I generated two kinds of random point patterns: one from the uniform distribution on a two-dimensional rectangle, the other by jittering a regular grid by a small amount.

My show choir director liked the second method (jittering) better because of the way it looks on stage: there are no gaps and no two performers are too close to each other. The statistician in me wants to know what statistical properties make the jittered pattern more desirable than the other. Said differently, can I do any of the following?

As part of my plan to learn new statistics, I've been reading Statistical Analysis and Modelling of Spatial Point Patterns by J. Illian, A. Penttinen, H. Stoyan, and D. Stoyan. The spatial statistics in this blog post come from their book.

Not all random configurations are created equal. A jittered pattern is random, but a pattern that is generated from a uniform distribution on a 2D rectangle exhibits complete spatial randomness (CSR).

There are several ways to test for CSR. Probably the easiest method is called the method of quadrats. The method consists of the following steps:

The theory says that if a point pattern is generated from a uniform distribution, the Pearson statistic has an approximate chi-square distribution with k-1 degrees of freedom, provided that k > 6 and e > 1.

Ugh! It takes longer to explain the algorithm in words than it does to implement it in the SAS/IML language! It's time for a concrete example.

The following SAS/IML statements generate 20 points from a random uniform distribution, define a 3x3 grid on the unit square, and call the Bin2D module to count how many points are in each cell of the grid:

For this example, there are 20 points and 9 cells, so you should expect 2.22 points in each cell. The following statements compute the residuals (observed counts minus the expected value) for each cell and compute the Pearson statistic, which in spatial statistics is also known as the index of dispersion:

When the points come from a uniform random distribution, d has a 90% chance of being within the interval [L, R], where L and R are the following quantiles of the chi-square distribution:

What Does It Mean? Time to Simulate

My brain is starting to hurt. What does this all mean in practice? 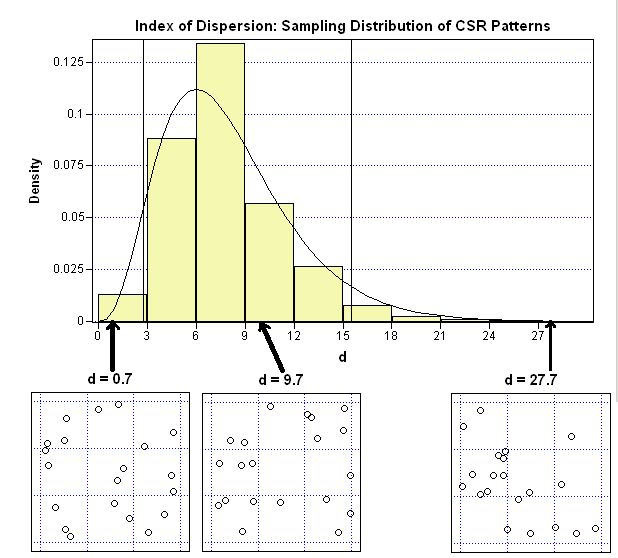 The adjacent image shows the results of the experiment, which I ran in SAS/IML Studio. The curve is a χ82 distribution. The vertical lines are at the values L and R.

For this experiment, 71 point patterns have Pearson statistics that are outside of the interval. This is not quite 10%, but it is close. Repeating the experiment with different numbers of points (for example, N=30 or 50) and different grids (for example, a 2x3 or 4x3) results in similar histograms that also have roughly 10% of their values outside of the corresponding confidence interval.

The little scatter plots underneath give an example of a point pattern with the indicated Pearson statistic. The middle scatter plot (d=9.7) is the plot of the random points generated in the previous section. It is a "typical" point pattern from the random uniform distribution; most of the point patterns look like this one. You can see that there is a lot of variation in the cell counts for this configuration: one of the bins contains zero points, another contains five.

The scatter plot on the left (d=0.7) is a not a typical point pattern from the random uniform distribution. All of the cells in this pattern have two or three points. It is a little counterintuitive, but it is rare that a truly random uniform point pattern has points that are evenly spaced in the unit square.

The scatter plot on the right (d=27.7) shows the other extreme: more variation than is expected. Five of the cells in this pattern have zero or one points. A single cell contains almost half of the points!

What about the Jittered Patterns?

The previous graph implies that the arrangements of points that are randomly generated from a uniform distribution are rarely evenly spaced. The usual case exhibits gaps and clusters.

If you instead generate 1,000 jittered patterns, as in my previous post, the distribution of the Pearson statistics looks like the following image. 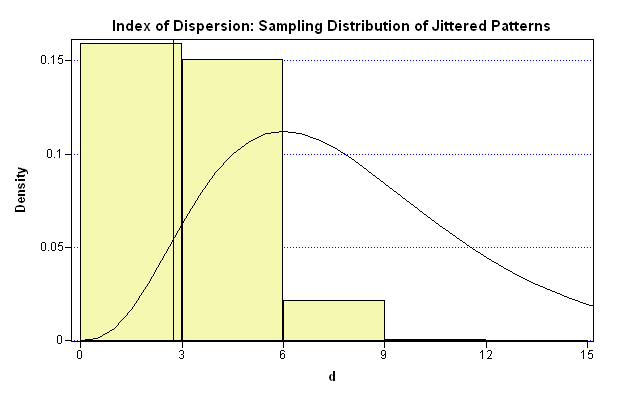 It's time to revisit the questions posed at the beginning of this post.

Can I compute a statistical measure that characterizes each kind of point pattern? Yes. The Pearson statistic tends to be small for jittered point patterns and tends to be larger for random uniform configurations. However, if the Pearson statistic for an example pattern is, say, between 3 and 6, I can't predict whether the points were generated by using the jittering algorithm or whether they were generated from a random uniform distribution.

Although statistics can be used to check the appropriateness of certain blocking configurations, I don't think that my director will be replaced by a SAS/IML program anytime soon: she also plays the piano!