Binning transforms a continuous numerical variable into a discrete variable with a small number of values. When you bin univariate data, you define cut point that define discrete groups. I've previously shown how to use PROC FORMAT in SAS to bin numerical variables and give each group a meaningful name such as 'Low,' 'Medium,' and 'High.' This article uses PROC HPBIN to create bins that are assigned numbers. If you bin the data into k groups, the groups have the integer values 1, 2, 3, ..., k. Missing values are put into the zeroth group.

There are two popular ways to choose the cut points. You can use evenly spaced points, or you can use quantiles of the data. If you use evenly spaced cut points (as in a histogram), the number of observations in each bin will usually vary. Using evenly spaced cut points is called the "bucket binning" method. Alternatively, if you use quantiles as cut points (such as tertiles, quartiles, or deciles), the number of observations in each bin tend to be more balanced. This article shows how to use PROC HPBIN in SAS to perform bucket binning and quantile binning. It also shows how to use the CODE statement in PROC HPBIN to create a DATA step that uses the same cut points to bin future observations.

The following statements create sample data from the Sashelp.Heart data. An ID variable is added to the data so that you can identify each observation. A call to PROC MEANS produces descriptive statistics about two variables: Cholesterol and Systolic blood pressure.

Each variable has a skewed distribution, as indicated by the values of the skewness statistic. This usually indicates that equal-length binning will result in bins in the tail of the distribution that have only a few observations.

Use PROC HPBIN to bin data into equal-length bins

A histogram divides the range of the data by using k evenly spaced cutpoints. The width of each bin is (Max – Min) / k. PROC HPBIN enables you to create new variables that indicate to which bin each observation belongs. You can use the global NUMBIN= option on the PROC HPBIN statement to set the default number of bins for each variable. You can use the INPUT statement to specify which variables to bin. You can override the default number of bins by using the NUMBIN= option on any INPUT statement.

Suppose that you want to bin the Cholesterol data into five bins and the remaining variables into three bins.

The following call to PROC HPBIN bins the variables. The output data set, HeartBin, contains the bin numbers for each observation. 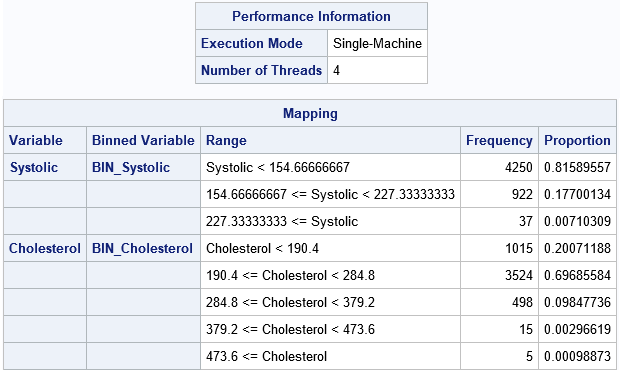 Part of the output from PROC HPBIN is shown. (You can suppress the output by using the NOPRINT option.) The first table shows that PROC HPBIN used four threads on my PC to compute the results in parallel. The second table summarizes the transformation that bins the data. For each variable, the second column gives the names of the binned variables in the OUTPUT= data set. The third column shows the cutpoints for each bin. The Frequency and Proportion column show the frequency and proportion (respectively) of observations in each bin. As expected for these skewed variables, bins in the tail of each variable contain very few observations (less than 1% of the total).

The OUTPUT= option creates an output data set that contains the indicator variables for the bins. You can use PROC FREQ to enumerate the bin values and (again) count the number of observations in each bin: 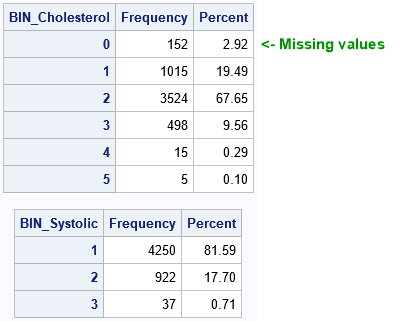 Bucket binning divides the range of the variables into equal-width intervals. For long-tailed data, the number of observations in each bin might vary widely, as for these data. The next section shows an alternative binning strategy in which the width of the bins vary and each bin contains approximately the same number of observations.

Use PROC HPBIN to bin data by using quantiles

You can use evenly-spaced quantiles as cutpoints in an attempt to balance the number of observations in the bins. However, if the data are rounded or have duplicate values, the number of observations in each bin can still vary. PROC HPBIN has two ways methods for quantile binning. The slower method (the QUANTILE option) computes cutpoints based on the sample quantiles and then bins the observations. The faster method (the PSEUDO_QUANTILE option) uses approximate quantiles to bin the data. The following call uses the PSEUDO_QUANTILE option to bin the data into approximately equal groups:

In the previous section, I used the CODE statement to specify a file that contains SAS DATA step code that can be used to bin future observations. The statements in the BinCode.sas file are shown below:

You can see from these statements that the zeroth bin is reserved for missing values. Nonmissing values will be split into bins according to the approximate tertiles (NUMBIN=3) or quintiles (NUMBIN=5) of the training data.

The following statements show how to use the file that was created by the CODE statement. New data is contained in the Patients data set. Simply use the SET statement and the %INCLUDE statement to bin the new data, as follows:

The input data can contain other variables (PatientID, Sex) that are not binned. However, the data should contain the Systolic and Cholesterol variables because the statements in the BinCode.sas file refer to those variables.

In summary, you can use PROC HPBIN in SAS to create a new discrete variable by binning a continuous variable. This transformation is common in machine learning algorithms. Two common binning methods include bucket binning (equal-length bins) and quantile binning (unequal-length bins). Missing values are put into their own bin (the zeroth bin). The CODE statement in PROC HPBIN enables you to write DATA step code that you can use to bin future observations.