On discussion forums, I often see questions that ask how to Winsorize variables in SAS. For example, here are some typical questions from the SAS Support Community:

It is clear from the questions that the programmer wants to modify the extreme values of dozens or hundreds of variables. As we will soon learn, neither of these requests satisfy the standard definition of Winsorization. What is Winsorization of data? What are the pitfalls and what are alternative methods?

The process of replacing a specified number of extreme values with a smaller data value has become known as Winsorization or as Winsorizing the data. Let's start by defining Winsorization. 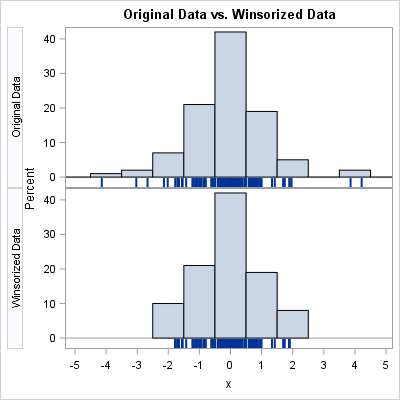 I consulted the Encyclopedia of Statistical Sciences (Kotz et al. (Eds), 2nd Ed, 2006) which has an article "Trimming and Winsorization " by David Ruppert (Vol 14, p. 8765). According to the article:

As shown by the quotes at the top of this article, posts on discussion forums sometimes muddle the definition of Winsorization. If you modify the data in an unsymmetric fashion, you will produce biased statistics.

Why do some people want to Winsorize their data? There are a few reasons:

There is no built-in procedure in SAS that Winsorizes variables, but there are some user-defined SAS macros on the internet that claim to Winsorize variables. BE CAREFUL! Some of these macros do not correctly handle missing values. Others use percentiles to determine the extreme values that are modified. If you must Winsorize, I have written a SAS/IML function that Winsorizes data and correctly handles missing values.

As an alternative to Winsorizing your data, SAS software provides many modern robust statistical methods that have advantages over a simple technique like Winsorization:

If the data contains extreme values, then classical statistics are influenced by those values. However, modifying the data is a draconian measure. Recently I read an article by John Tukey, one of the early investigator of robust estimation. In the article "A survey of sampling from contaminated distributions" (1960), Tukey says (p. 457) that when statisticians encounter a few extreme values in data,

we are likely to think of them as 'strays' [or]'wild shots' ... and to focus our attention on how normally distributed the rest of the distribution appears to be. One who does this commits two oversights, forgetting Winsor's principle that 'all distributions are normal in the middle,' and forgetting that the distribution relevant to statistical practice is that of the values actually provided and not of the values which ought to have been provided.

Sets of observations which have been de-tailed by over-vigorous use of a rule for rejecting outliers are inappropriate, since they are not samples.


I love this second quote. All of the nice statistical formulas that are used to make inferences (such as standard errors and confidence intervals) are based on the assumption that the data are a random sample that contains all of the observed values, even extreme values. The tails of a distribution are extremely important, and indiscriminately modifying large and small values invalidates many of the statistical analyses that we take for granted.

Should you Winsorize data? Tukey argues that indiscriminately modifying data is "inappropriate." In SAS, you can get the Winsorized mean directly from PROC UNIVARIATE. SAS also provides alternative robust methods such the ones in the ROBUSTREG and QUANTREG procedures.

If you decide to use Winsorization to modify your data, remember that the standard definition calls for the symmetric replacement of the k smallest (largest) values of a variable with the (k+1)st smallest (largest). If you download a program from the internet, be aware that some programs use quantiles and others do not handle missing values correctly.

What are your thoughts about Winsorizing data? Share them in the comments.