As a general rule, when SAS programmers want to manipulate data row by row, they reach for the SAS DATA step. When the computation requires column statistics, the SQL procedure is also useful. When both row and column operations are required, the SAS/IML language is a powerful addition to a SAS programmer's toolbox.

I was reminded of this fact recently when a SAS programmer (possibly a student) asked how to "manually" perform the classic chi-square test for association in a two-way frequency table. The computation requires computing the means across rows and down columns, and the student was struggling with implementing the computations in the DATA step. This article illustrates how SAS/IML can simplify the rowwise and columnwise computations in the classic chi-square test.

The chi-square test for association in PROC FREQ

In SAS, the easy way to compute the chi-square test for association is to use PROC FREQ. The following data are from several examples in the PROC FREQ documentation. The data shows the hair color and eye color of 762 European children. The call to PROC FREQ computes the chi-square test and a cross-tabulation that displays the observed value, expected values (under the hypothesis that hair color and eye color are independent), and deviations, which are the "observed minus expected" values: 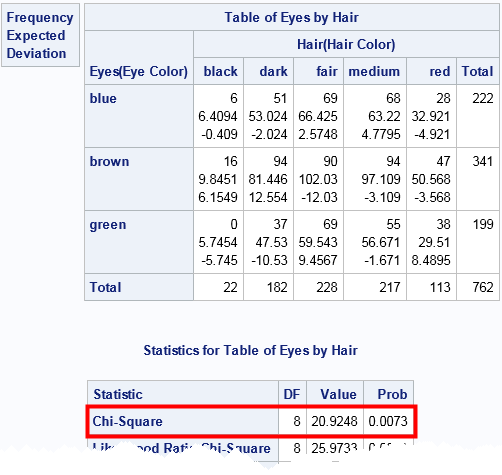 In the eye-by-hair table, each cell contains three values. The first value is the observed cell count, the second value is the expected cell count (assuming independence), and the third value is their difference, which is sometimes called the "deviation." The test statistic and p-value for the chi-square test are outlined in red. The test statistic is 20.92. The probability of observing that value from a random draw of a chi-square distribution with 8 degrees of freedom is 0.0073. Because that probability is so small, we reject the null hypothesis that hair color and eye color are independent.

The chi-square test on a 3 x 4 table is simple enough to compute by hand, but suppose you want to use SAS to validate or reproduce the numbers that PROC FREQ produces? This is a good programming exercise for students to make sure they understand the computations. The PROC FREQ documentation provides the formula for the test statistic by using the equation

where nij is the observed count in row i and column j and eij is the expected count, but there is nothing like programming a formula to ensure understanding.

The following steps indicate the (vectorized) computations that can be used to implement the chi-square test in SAS/IML. 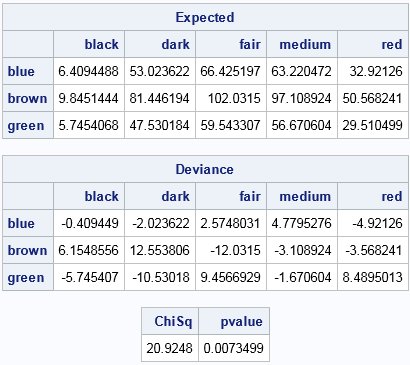 Notice that the program does not contain any loops, although the formulas contain double summations over the elements of the table. This is an example of "vectorizing" the computations, which means writing the computations as vector or matrix computations rather than scalar operations in a loop.

In summary, you can use the high-level SAS/IML language to implement basic statistical tests such as the chi-square test for association in a two-way frequency table. Such an exercise enables students to understand the details of elementary statistical tests. For programmers who know the statistical details but who are new to the SAS/IML language, this short exercise provides a way to gain proficiency with vectorized programming techniques.