I have previously shown how to use numerical integration and root-finding algorithms to compute the CDF and quantile function for continuous distributions such as the folded normal distribution and the generalized Gaussian distribution. For discrete distributions, you can use a summation to obtain the CDF from the PDF. The CDF at X=x is the sum of the PDF values for all values of X that are less than or equal to x. The discrete CDF is a step function, so it does not have an inverse function. Given a probability, p, the quantile for p is defined as the smallest value of x for which CDF(x) ≥ p.

To simplify the discussion, assume that the random variable X takes values on the integers 0, 1, 2, .... Many discrete probability distributions in statistics satisfy this condition, including the binomial, Poisson, geometric, beta-binomial, and more.

Compute a CDF from a PDF

I will use SAS/IML software to implement the CDF and quantile functions. The following SAS/IML modules define the PDF function and the CDF function. If you pass in a scalar value for x, the CDF function computes the PDF from X=0 to X=x and sums up the individual probabilities. When x is a vector, the implementation is slightly more complicated, but the idea is the same.

You can write the CDF values to a SAS data set and graph them to visualize the CDF of the beta-binomial distribution, as shown below: 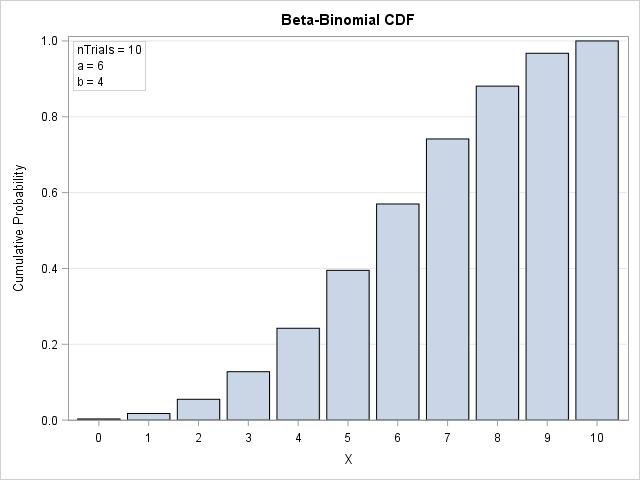 Compute quantiles from the CDF

Given a probability value p, the quantile for p is smallest value of x for which CDF(x) ≥ p. Sometimes you can find a formula that enables you to find the quantile directly, but, in general, the definition of a quantile requires that you compute the CDF for X=0, 1, 2,... and so forth until the CDF equals or exceeds p.

The support of the beta-binomial distribution is the set {0, 1, ..., nTrials}. The following function first computes the CDF function for all values. It then looks at each value of p and returns the corresponding value of X that satisfies the quantile definition.

The output shows the quantile values for p = {0.2, 0.5, 0.8}. You can find the quantiles visually by using the graph of the CDF function, shown in the previous section. For each value of p on the vertical axis, draw a horizontal line until the line hits a bar. The x value of the bar is the quantile for p.

In summary, you can compute the CDF and quantile functions for a discrete distribution directly from the PDF. The process was illustrated by using the beta-binomial distribution. The CDF at X=x is the sum of the PDF evaluated for all values less than x. The quantile for p is the smallest value of x for which CDF(x) ≥ p.