Near collinearity among the explanatory variables in a regression model requires special handling because:

In SAS there are two easy ways to compute principal component regression:

Notice that neither of these methods calls PROC PRINCOMP. You could call PROC PRINCOMP, but it would be more complicated than the previous methods. You would have to extract the first principal components (PCs), then use PROC REG to compute the regression coefficients for the PCs, then use matrix computations to convert the parameter estimates from the PCs to the original variables.

Principal component regression is also sometimes used for general dimension reduction. Instead of projecting the response variable onto a p-dimensional space of raw variables, PCR projects the response onto a k-dimensional space where k is less than p. For dimension reduction, you might want to consider another approach such as variable selection by using PROC GLMSELECT or PROC HPGENSELECT. The reason is that the PCR model retains all of the original variables whereas variable selection procedures result in models that have fewer variables.

I recommend using the PLS procedure to compute a principal component regression in SAS. As mentioned previously, you need to use the METHOD=PCR and NFAC= options. The following data for 31 men at a fitness center is from the documentation for PROC REG. The goal of the study is to predict oxygen consumption from age, weight, and various physiological measurements before and during exercise. The following call to PROC PLS computes a PCR that keeps four principal components: 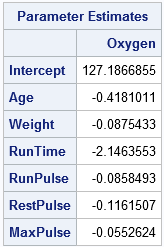 For another example of using PROC PLS to combat collinearity, see Yu (2011), "Principal Component Regression as a Countermeasure against Collinearity."

I recommend PROC PLS for principal component regression, but you can also compute a PCR by using the PCOMIT= option on the MODEL statement in PROC REG. However, the parameter estimates are not displayed in any table but must be written to OUTEST= data set, as follows:

Notice that the PCOMIT=2 option specifies that two PCs should be dropped, which is equivalent to keeping four components in this six-variable model. The parameter estimates are written to the PE data set and are displayed by PROC PRINT. The estimates the same as those found by PROC PLS. In the PE data, the PCR estimates are indicated by the value "IPC" for the _TYPE_ variable, which stands for incomplete principal component regression. The word "incomplete" indicates that not all the principal components are used.

Should you use principal component regression?