A previous article discussed the mathematical properties of the singular value decomposition (SVD) and showed how to use the SVD subroutine in SAS/IML software. This article uses the SVD to construct a low-rank approximation to an image. Applications include image compression and denoising an image.

The value of each pixel in a grayscale image can be stored in a matrix where each element of the matrix is a value between 0 (off) and 1 (full intensity). I want to create a small example that is easy to view, so I'll create a small matrix that contains information for a low-resolution image of the capital letters "SVD." Each letter will be five pixels high and three pixels wide, arranges in a 7 x 13 array of 0/1 values. The following SAS/IML program creates the array and displays a heat map of the data: 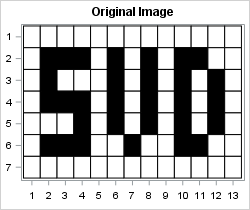 A low-rank approximation to an image

Because the data matrix contains only five non-zero rows, the rank of the A matrix cannot be more than 5. The following statements compute the SVD of the data matrix and create a plot of the singular values. The plot of the singular values is similar to the scree plot in principal component analysis, and you can use the plot to help choose the number of components to retain when approximating the data. 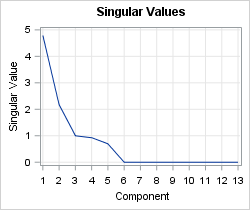 For this example, it looks like retaining three or five components would be good choices for approximating the data. To see how low-rank approximations work, let's generate and view the rank-1, rank-2, and rank-3 approximations: 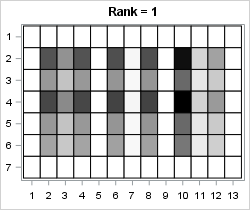 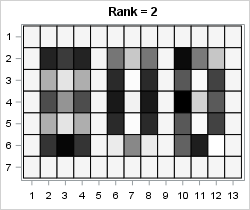 The rank-2 approximation refines the image and adds additional details. You can begin to make out the letters "SVD." In particular, all three horizontal strokes for the "S" are visible and you can begin to see the hole in the capital "D." 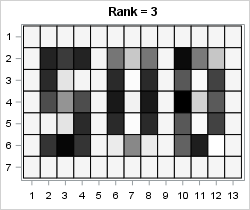 The rank-3 approximation contains enough details that someone unfamiliar with the message can read it. The "S" is reconstructed almost perfectly and the space inside the "V" and "D" is almost empty. Even though this data is five-dimensional, this three-dimensional approximation is very good.

You can use the singular value decomposition and low-rank approximations to try to eliminate random noise that has corrupted an image. Every TV detective series has shown an episode in which the police obtain a blurry image of a suspect's face or license plate. The detective asks the computer technician if she can enhance the image. With the push of a button, the blurry image is replaced by a crystal clear image that enables the police to identify and apprehend the criminal.

The image reconstruction algorithms used in modern law enforcement are more sophisticated than the SVD. Nevertheless, the SVD can do a reasonable job of removing small random noise from an image, thereby making certain features easier to see. The SVD has to have enough data to work with, so the following statements duplicate the "SVD" image four times before adding random Gaussian noise to the data. The noise has a standard deviation equal to 25% of the range of the data. The noisy data is displayed as a heat map on the range [-0.25, 1.25] by using a color ramp that includes yellow for negative values and blue for values greater than 1. 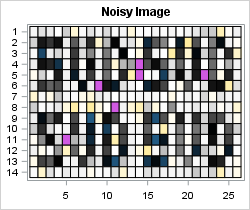 I think most police officers would be able to read this message in spite of the added noise, but let's see if the SVD can clean it up. The following statements compute the SVD and create a plot of the singular values: 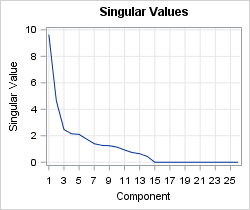 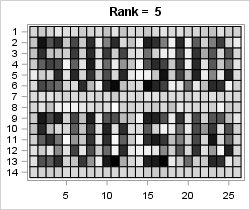 The denoised low-rank image is not as clear as Hollywood depicts, but it is quite readable. It is certainly good enough to identify a potential suspect. I can hear the detective mutter, "Book 'em, Danno! Murder One."

For similar analyses and examples that use the singular value decomposition, see

In SAS software, the SVD is heavily used in the SAS Text Miner product. For an overview of how a company can use text mining to analyze customer support issues, see Sanders and DeVault (2004) "Using SAS at SAS: The Mining of SAS Technical Support."