After reading my article about how to use BY-group processing to run 1000 regression models, a SAS programmer asked whether it is possible to reorder the output of a BY-group analysis. The answer is yes: you can use the DOCUMENT procedure to replay a portion of your output in any order you like. It is a feature of the SAS ODS system that is not very well known to statisticians. Kevin Smith (2012) has called PROC DOCUMENT "the most underutilized tool in the ODS toolbox."

The end of this article contains links to several papers that explain how PROC DOCUMENT works. I was first introduced to PROC DOCUMENT by Warren Kuhfeld, who uses it to modify the graphical output that comes from statistical procedures.

Reordering output (the topic of this article) is much easier than modifying the output. There is a SAS Sample that shows how to use PROC DOCUMENT to reorder BY groups, but I will show a simpler variation. The SAS Sample mentions that you can also use SAS macros to order the output from BY-group analyses, but the macro method is less efficient, computationally speaking.

A basic reordering of the SAS output uses the following steps:

Step 1: Store the output in a document

The following statements generate descriptive statistics for six clinical variables and for each level of the Smoking_Status variable. The Smoking_Status variable indicates whether a patient in this study is a non-smoker, a light smoker, and so on. PROC MEANS generates statistics for the continuous variable; PROC FREQ generates counts for the levels of the discrete variables. The ODS DOCUMENT statement writes all of the ODS output information to a SAS document (technically an item store) called 'doc':

Step 2: Examine the names of the objects in the document

At this point, the output is captured in an ODS document. Each object is assigned a name that is closely related to the ODS name that is displayed if you use ODS TRACE ON. You can use PROC DOCUMENT to list the contents of the SAS item store. This will tell you the names of the ODS objects in the document. 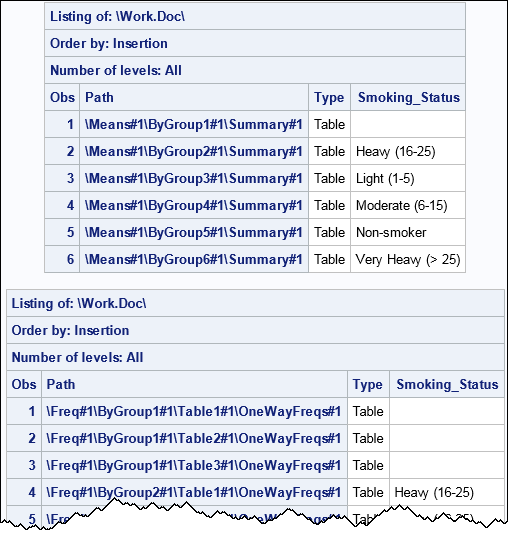 The output shows the table names. The tables from PROC MEANS begin with "\Means" and end with the name of the table, which is "Summary." (The references explain the purpose of the many "#1" strings, which are called sequence numbers.) Similarly, the tables from PROC FREQ begin with "\Freq" and end with "OneWayFreqs." Notice that the listing includes the BY-group variable as a column. You can use this variable to list or replay only certain BY groups. For example, to list only the tables for non-smokers, you can run the following PROC DOCUMENT statements: 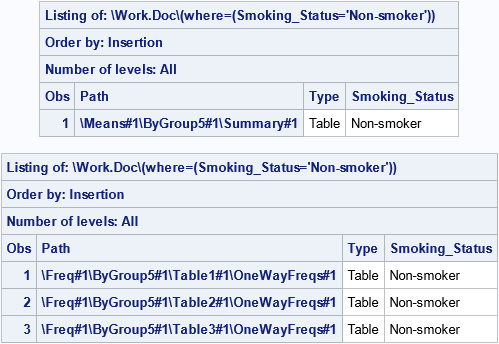 The output shows that there are four tables that correspond to the output for the "Non-smoker" level of the BY group.

Step 3: Replay the output in any order

The previous section showed that you can use a WHERE clause to list all the tables (and graphs) in a BY group. The REPLAY Statement also supports a WHERE clause, and you can use the REPLAY statement to send only those tables to the open ODS destinations. The DOCUMENT procedure is still running, so the following statements produce the output:

The output is not shown, but it consists of all tables for which Smoking_Status="Non-smoker," regardless of which procedure created the output.

Notice that the "Non-smoker" group was the fifth level (in alphabetical order) of the Smoking_Status variable. You can use multiple REPLAY statements to send output for other levels in any order. For example, you might want to output the tables only for smokers, and order the output according to how much tobacco the patients consume. The following statement output the tables for smokers, grouped by tobacco usage:

For brevity I have left out many details about the syntax of PROC DOCUMENT, but I hope the main idea is clear: You can store the results of multiple computations in a document and then replay any subset of the results in any order. The references in the next section contain many useful tips and techniques to help you get the most out of PROC DOCUMENT.

For an innovative use of PROC DOCUMENT to modify statistical graphics, see the papers and books by Warren Kuhfeld, such as Kuhfeld (2016) "Highly Customized Graphs Using ODS Graphics."