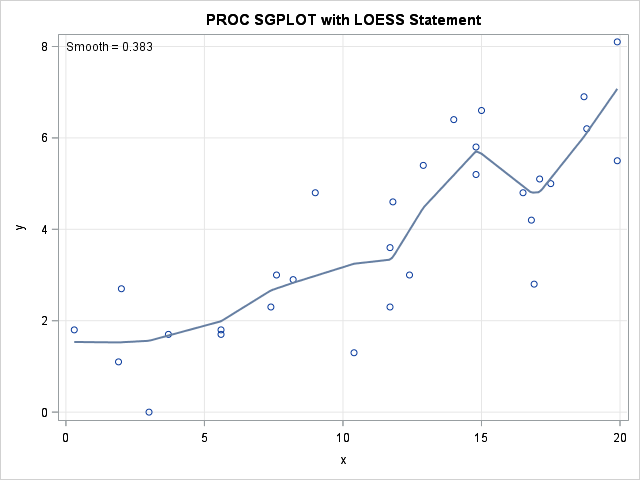 Loess regression is a nonparametric technique that uses local weighted regression to fit a smooth curve through points in a scatter plot. Loess curves are can reveal trends and cycles in data that might be difficult to model with a parametric curve. Loess regression is one of several algorithms in SAS that can automatically choose a smoothing parameter that best fits the data.

In SAS, there are two ways to generate a loess curve. When you want to see statistical details for the fit, use the LOESS procedure. If you just want to overlay a smooth curve on a scatter plot, you can use the LOESS statement in PROC SGPLOT.

This article discusses the 1-D loess algorithm and shows how to control features of the loess regression by using PROC LOESS and PROC SGPLOT. You can also use PROC LOESS to fit higher dimensional data; the PROC LOESS documentation shows an example of 2-D loess, which fits a response surface as a function of two explanatory variables.

Overview of the loess regression algorithm

The loess algorithm, which was developed by Bill Cleveland and his colleagues in the late '70s through the 'early 90s, has had several different incarnations. Assume that you are fitting the loess model at a point x0, which is not necessarily one of the data values. The following list describes the main steps in the loess algorithm as implemented in SAS:

These four steps implement the basic loess method. The SAS procedures add a fifth step: optimize the smoothing parameter by fitting multiple loess models. You can use a criterion such as the AICC or GCV to balance the tradeoff between a tight fit and a complex model. For details, see the documentation for selecting the smoothing parameter.

How to score a loess regression model

The previous section told you how to fit a loess model at a particular point x0. PROC LOESS provides two choices for the locations at which you can evaluate the model:

Comparing PROC LOESS and the LOESS statement in PROC SGPLOT

The MODEL statement for the LOESS procedure provides many options for controlling the loess regression model. The LOESS statement in PROC SGPLOT provides only a few frequently used options. In some instances, PROC SGPLOT uses different default values, so it is worthwhile to compare the two statements.

A loess example in SAS

The following SAS DATA step creates 30 observations for X and Y variables. The call to PROC LOESS creates a loess curve to the data and creates a fit plot, a residual plot, and a panel of diagnostic plots. Only the fit plot is shown:

For the PROC LOESS call, all options are the default values except for the PRESEARCH suboption in the SELECT= option. You can create the same fit plot by using the LOESS statement in PROC SGPLOT. The default interpolation scheme in PROC SGPLOT is cubic, so the following statements override that default option:

In conclusion, SAS provides two ways to overlay a smooth loess curve on a scatter plot. You can use PROC LOESS when you want to see the details of statistical aspects of the fit and the process that optimizes the smoothing parameter. You can use the SGPLOT procedure when you care less about the details, but simply want an easy way to show a nonlinear relationship between a response and an explanatory variable.