My last blog post described three ways to add a smoothing spline to a scatter plot in SAS. I ended the post with a cautionary note:


From a statistical point of view, the smoothing spline is less than ideal because the smoothing parameter must be chosen manually by the user.

This means that you can specify a smoothing spline parameter that appears to fit the data, but the selection is not based on an objective criterion. In contrast, SAS software supports several other methods for which the software can automatically choose a smoothing parameter that maximizes the goodness of fit while avoiding overfitting. This article describes penalized B-splines loess curves, and thin-plate splines.

To illustrate fitting a smooth curve to a scatter plot, I'll use the SasHelp.enso data set, which contains data on the "southern oscillation," a cyclical phenomenon in atmospheric pressure that is linked to the El Niño and La Niña temperature oscillations in the Pacific Ocean. (ENSO is an acronym for El Niño-Southern Oscillation.) The ENSO data is analyzed in an example in the PROC TRANSREG documentation.

The following statements fit a penalized B-spline to the ENSO data: 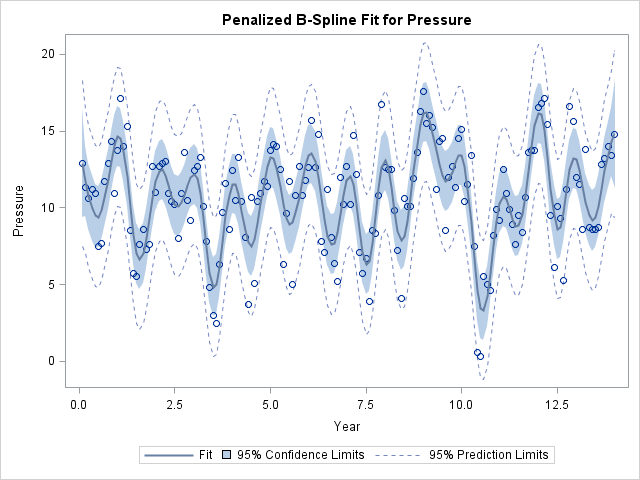 The data shows an oscillation of pressure in a yearly cycle. There are 14 peaks and valleys in this 14-year time series, which correspond to 14 winters and 14 summers.

A loess curve is not a spline. A loess model at x uses a local neighborhood of x to compute a weighted least squares estimate. The smoothing parameter is the proportion of data in the local neighborhood: a value near 0 results in a curve that nearly interpolates the data whereas a value near 1 is nearly a straight line. You can fit loess curves to data by using the LOESS procedure or by using the LOESS statement in the SGPLOT procedure. The LOESS procedure enables you to specify many options that control the fit, including the criterion used to select the optimal smoothing parameter. The LOESS procedure supports the AICC and GCV criteria, among others. The default criterion is the AICC.

The default loess fit to the ENSO data is computed as follows: 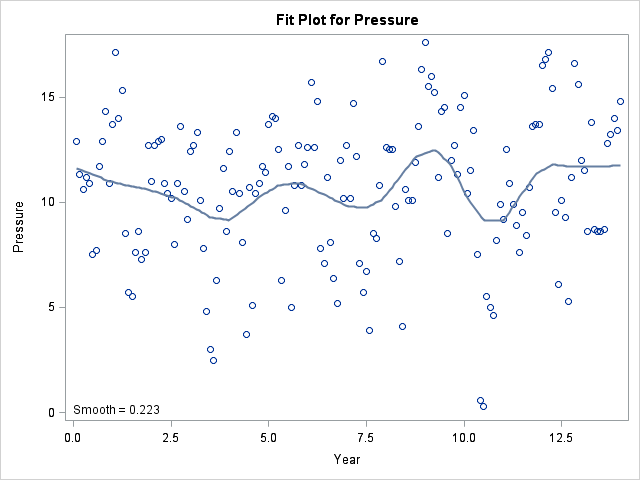 The loess curve looks different than the penalized B-spline curve. The loess curve seems to contain irregularly spaced peaks that are 4–7 years apart. This is the El Niño oscillation cycle, which is an irregular cycle. The selected smoothing parameter is about 0.2, which means that about one-fifth of the observations are used for each local neighborhood during the estimation.

Earlier I said that the LOESS and TRANSREG procedures automatically choose parameter values that optimize some criterion. So why the difference in these plots? The answer is that the criterion curves sometimes have local minima, and for the ENSO data the LOESS procedure found a local minimum that corresponds to the El Niño cycle. The curve that shows the AICC criterion as a function of the smoothing parameter is shown below: 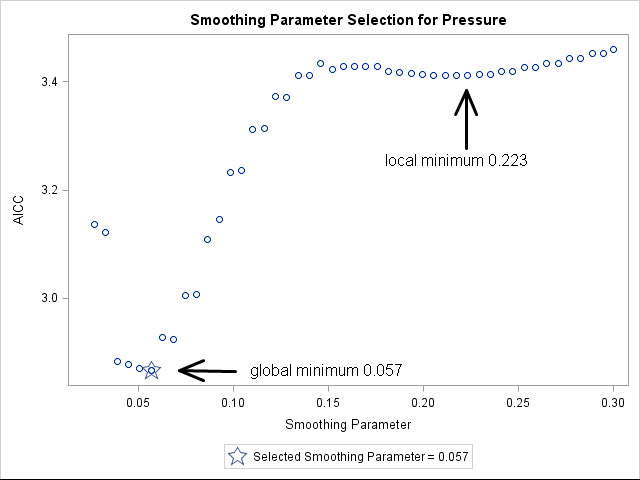 The LOESS procedure supports several options that enable you to explore different ranges for the smoothing parameter or to search for a global minimum. I recommend using the PRESEARCH option in order to increase the likelihood of finding a global minimum. For example, for the ENSO data, the following call to PROC LOESS finds the global minimum at 0.057 and produces a scatter plot smoother that looks very similar to the penalized B-spline smoother.

Smoothers with the SGPLOT procedure

Because the loess and penalized B-spline smoothers work well for most data, the SGPLOT procedure supports the PBSPLINE and LOESS statements for adding smoothers to a scatter plot. By default the statements also add the scatter plot markers, so use the NOMARKERS options if you are overlaying a smoother on an existing scatter plot: 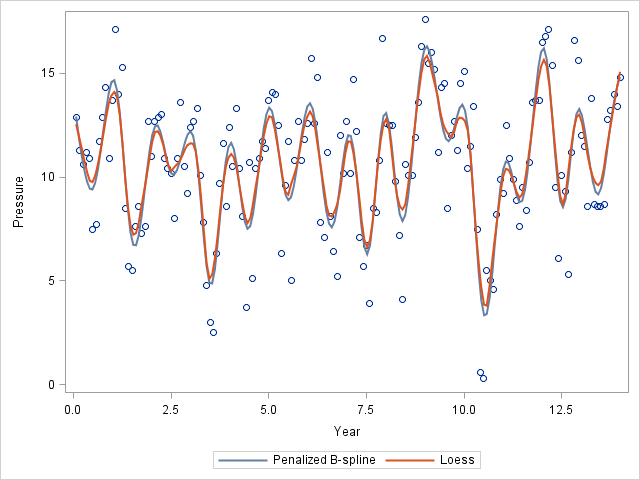 As you can see, the two smoothers produce very similar results on the ENSO data. That is often the case, but not always.

I'm not going to shows examples of every nonparametric regression procedure in SAS, but I do want to mention one more. A thin-plate spline yet another spline that can be used to smooth data. The TPSPLINE procedure supports the GCV criterion for the automatic selection of the smoothing parameter. For the ENSO data, the TPSPLINE procedure produces a smoother the reveals the annual pressure cycle and is very similar to the previous curves:

In conclusion, SAS software provides several ways to fit a smoother to data. The procedures mentioned in this article can automatically select a smoothing parameter that satisfies some objective criterion which balances goodness of fit with model parsimony. Do you have a favorite smoother? Let me know in the comments.