By default, when you use the SERIES statement in PROC SGPLOT to create a line plot, the observations are connected (in order) by straight line segments. However, SAS 9.4m1 introduced the SMOOTHCONNECT option which, as the name implies, uses a smooth curve to connect the observations. In Sanjay Matange's blog, he shows an example where the SMOOTHCONNECT option interpolates points in a time series by using a smooth curve. In the example, the smooth curve does a good job of smoothly connecting the evenly spaced data points.

However, in a second post, Sanjay shows how the SMOOTHCONNECT option can result in curves that are less ideal. Here is a SAS program that reproduces the gist of Sanjay's example: 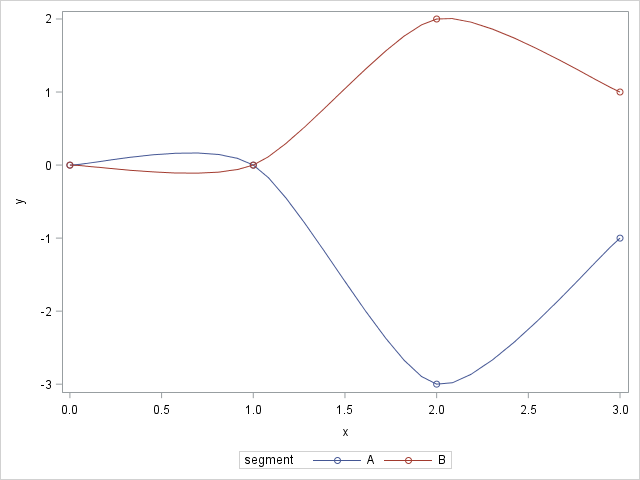 This visualization could give the wrong impression to the viewer of the graph, especially if the markers are not displayed. We only have data for four values of X. However, the SMOOTHCONNECT option makes it appear that the graph for group A was higher than group B on the interval (0, 1). That may or may not be true. The curves also give the impression that the curve for group A began to decrease prior to x=1, whereas in fact we have no idea when the curve reached a maximum and began to decrease.

Sanjay's example demonstrates the first three issues. Notice that the maximum Y value for group A in the data is Y=0, but the interpolating spline exceeds that value.

To demonstrate the fourth and fifth items requires an artificial example and data that is not evenly spaced along the X variable: 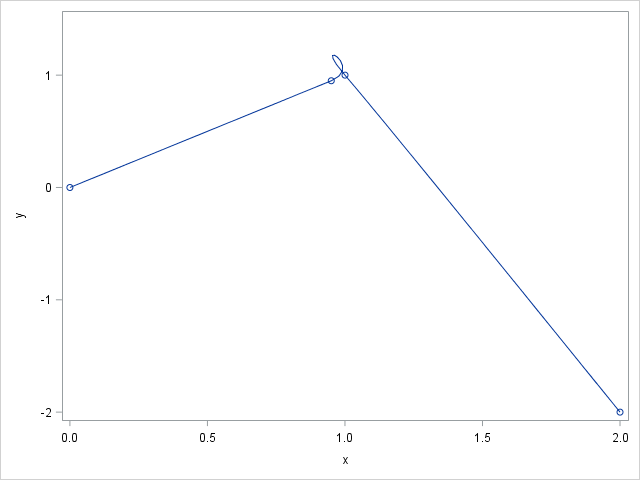 There are only four points in the data set, but the SMOOTHCONNECT curve for these data exhibits a sharp turn (in fact, a loop). I intentionally created data that would create this behavior by making the data linear for X < 2. I also made the second data point very close to the third data point so that the interpolating curve would have to gyrate widely to pass through the points before sloping down to pass through the fourth point.

It is well known among applied mathematicians that interpolation can lead to issues like these. These issues are not caused by a bug in SAS, but by the fact that you are trying to force a smooth curve to pass through every data point. I point them out so that SAS users who are using SGPLOT can be aware of them.

If your data are evenly spaced in the horizontal direction, the first three issue are usually small and innocuous. The last two issue will not occur. Therefore, it is safe to use the SMOOTHCONNECT option for evenly spaced data.

If your data are not evenly spaced, here are a few guidelines to help you avoid wild interpolating curves:

In summary, if you use the SMOOTHCONNECT option in the SERIES statement, SAS will pass a smooth curve through the points. When the points are unevenly spaced in X, the curve might need to quickly change direction to pass through all the data. The resulting curve might not be a good representation of the data. In this case, you might need to relax the requirements of a smooth interpolating curve, either by using a piecewise linear interpolation or by using a smooth curve that is not constrained to pass through the data.