Like many SAS programmers, I use the Statistical Graphics (SG) procedures to graph my data in SAS. To me, the SGPLOT and SGRENDER procedures are powerful, easy to use, and produce fabulous ODS graphics. I was therefore surprised when a SAS customer told me that he continues to use the old GPLOT procedure because "the procedure makes it easy to add a smoothing spline curve to a scatter plot." The customer likes using smoothing splines, which are produced by using the INTERPOL=SMnn option on the SYMBOL statement. He added that smoothing splines are not available in PROC SGPLOT.

My response: If you like the GPLOT procedure, you are certainly welcome to continue using it. However, if the only reason you use it is to add a spline curve to a scatter plot, you should know that there are alternatives. This article shows how to fit a spline curve by using by using PROC TRANSREG or PROC IML.

A spline is one way to fit a smooth curve to two-dimensional data. There are actually many kinds of splines. The "smoothing spline" that the customer likes is a cubic spline, but SAS supports thin-plate splines and penalized B-splines, just to name two others. Let's see what a spline curve looks like as created by PROC GPLOT and the SYMBOL INTERPOL=SMnn option: 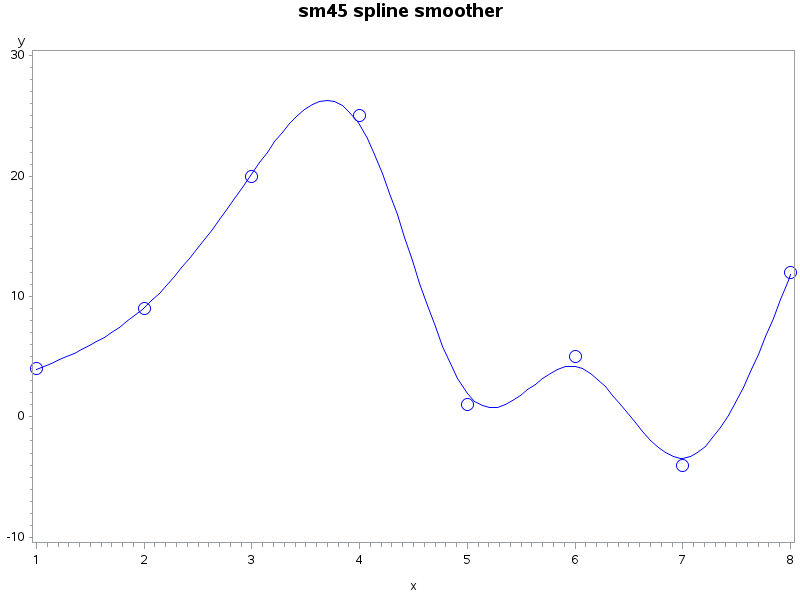 The graph displays a scatter plot overlaid with a spline smoother. In the SYMBOL statement, the last two digits of the INTERPOL=SM option specify the amount of smoothness in the spline curve. A value close to zero results in a curve with many wiggles that nearly passes through every data point. A value close to 100 results in a flat curve that is nearly the least-squares regression line for the data. Many examples that I have seen use smoothing values in the range 40–60.

Computing a spline curve by using the TRANSREG procedure

The easiest way to generate an ODS graph that shows the same curve is to use the TRANSREG procedure in SAS/STAT software. The TRANSREG procedure supports a SMOOTH transformation of an explanatory variable. The SM= option enables you to specify a smoothing value in the range [0, 100], which is the same range as for PROC GPLOT. 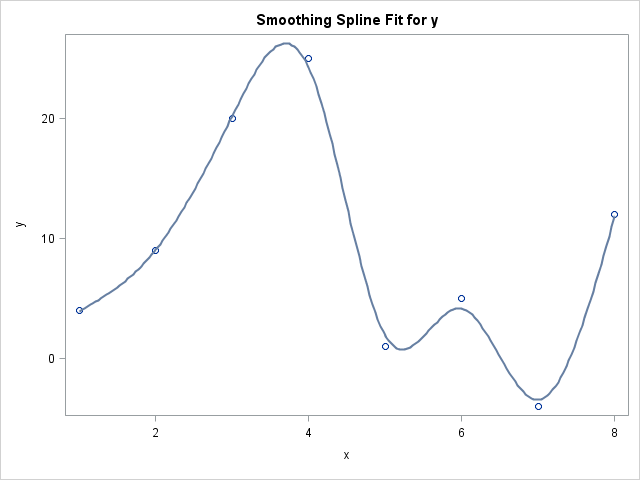 Computing a spline curve in SAS/IML

Other ways to smooth a scatter plot