One of the strengths of the SGPLOT procedure in SAS is the ease with which you can overlay multiple plots on the same graph. For example, you can easily combine the SCATTER and SERIES statements to add a curve to a scatter plot.

A similar limitation exists for bar charts in PROC SGPLOT: you cannot specify the VBAR and SERIES statements in a single call. However, in SAS 9.3 and beyond you can use the VBARPARM statement in SAS 9.3 to overlay a curve and a bar chart.

In SAS 9.4m3 there is yet another VBAR-like statement that enables you to combine bar charts with one or more other plots. The new the VBARBASIC and the HBARBASIC statements create a bar chart that is compatible with basic plots such as scatter plots, series plots, and box plots. These statements can summarize raw data like the VBAR statement can. In other words, if you use the VBARBASIC and HBARBASIC statements on raw data, the counts will be automatically computed. However, you can also use the statements on pre-summarized data: specify the height of the bars by using the RESPONSE= option.

Overlay a curve on a bar chart in SAS

In most situations it doesn't make sense to overlay a continuous curve on a discrete bar chart, which is why the SG routines have the concept of compatible plot types. However, there is a canonical example in elementary statistics that combines continuous and discrete data: the normal approximation to the binomial distribution. 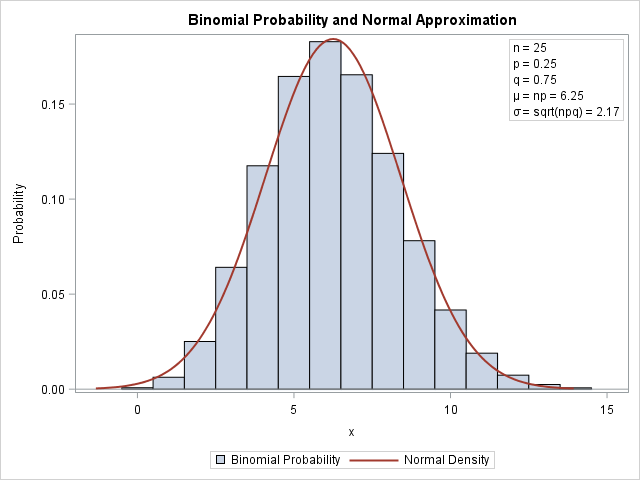 Recall that if X is the number of successes in n independent trials for which the probability of success is p, then X is binomially distributed: X ~ Binom(n, p). A well-known rule says that if np > 5 and n(1-p) > 5, then the binomial distribution is approximated by a normal distribution with mean np and standard deviation sqrt(np(1-p)).

This rule is often illustrated by overlaying the continuous normal PDF on a bar chart that shows the binomial distribution, as shown to the left. To create this plot, I used the VBARBASIC statement to create the bar chart. Because the VBARBASIC statement creates a "basic plot," you can combine it with another basic plot, such as the line plot created by using a SERIES statement. For fun, I used an INSET statement to overlay a box of parameter values for the graph. The graph shows that the binomial probability at j is approximated by the area under the normal density curve on the interval [j-0.5, j+0.5].

The following SAS statements use the PDF function to evaluate the binomial probabilities and the normal density for the graph. The values for μ and σ are stored in macro variables for later use.

The TYPE=LINEAR option on the XAXIS statement tells the horizontal axis to use interval tick marks. The BARWIDTH=1 option on the VBARBASIC statement makes the bar chart look more like a histogram by eliminating the gaps between bars. The graph is shown at the top of this section. 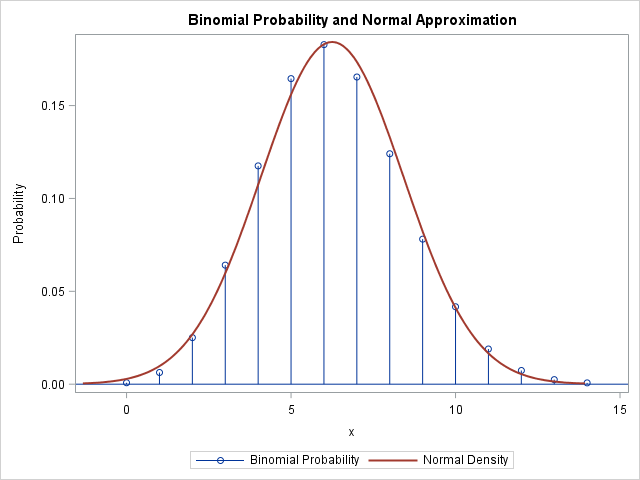