Over at the SAS Discussion Forums, someone asked how to use SAS to fit a Poisson distribution to data. The questioner asked how to fit the distribution but also how to overlay the fitted density on the data and to create a quantile-quantile (Q-Q) plot.

Do I receive emails at a constant rate? 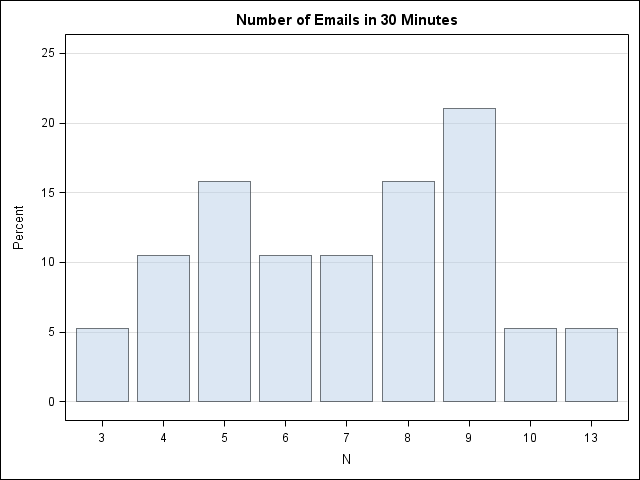 The mean of the data is about 7. A Poisson(7) distribution looks approximately normal—which these data do not. On the other hand, there are less than 20 observations in the data, so let's proceed with the fit. (I actually looked at several days of email before I found a day that I could model as Poisson, so these data are NOT a random sample!)

The first step is to fit the Poisson parameter to the data. You can do this in PROC GENMOD by by using the DIST= option to specify a Poisson distribution. Notice that I do not specify any explanatory variables, which means that I am fitting the mean of the data.

At this point you should look at the goodness-of-fit and parameter estimates tables that PROC GENMOD creates to see how well the model fits the data. I will skip these steps.

The P= option on the OUTPUT statement outputs the mean, which is also the parameter estimate for the fitted Poisson distribution. The mean is about 7.1. The following statements set a macro variable to that value and create a data set (PMF) that contains the Poisson(7.1) density for various x values. In a subsequent step, I'll overlay this fitted density on the empirical density.

Overlay the empirical and fitted densities

I want to overlay the discrete density on a bar chart of the data. One way to visualize the discrete density is as a scatter plot of (x, pdf(x)) values that represent the fitted density at x=0, 1,...,13. Unfortunately, you cannot use the VBAR and the SCATTER statements in the same SGPLOT call to overlay a bar chart and a scatter plot. However, in SAS 9.3 you can use the VBARPARM statement together with the SCATTER statement. (Thanks to "PGStats" for this suggestion.) The VBARPARM statement requires that you compute the heights of the bars yourself, but the heights are easily constructed from the PROC FREQ output that was created earlier: 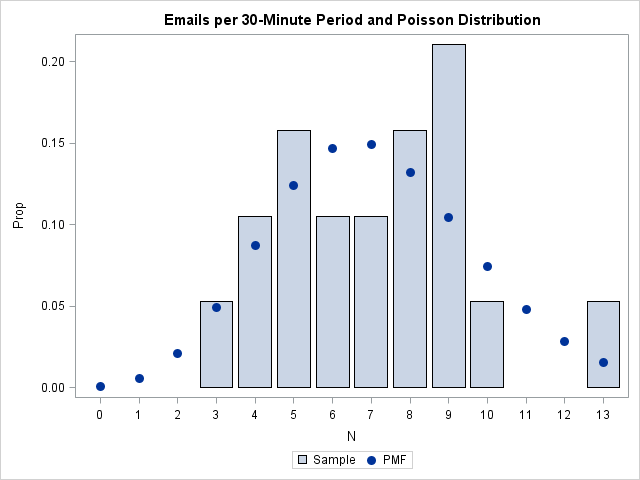 On the Discussion Forum, the questioner asked for a quantile-quantile plot. I don't know whether I've ever seen a Q-Q plot for a discrete distribution before; usually they are shown for continuous distributions. However, you can create a discrete Q-Q plot by following exactly the same steps that I described in my previous article on how to compute a Q-Q plot: 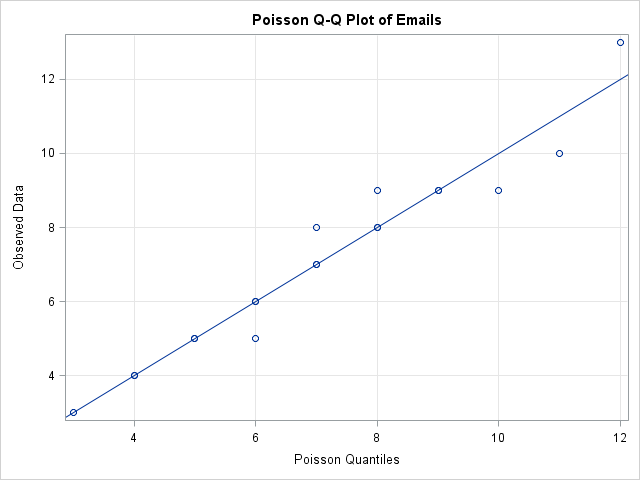 I've created a discrete Q-Q plot, but is it useful? A drawback appears to be that the discrete Q-Q plot suffers from overplotting, whereas a continuous Q-Q plot does not. A continuous CDF function is one-to-one so the quantiles of the ranks of the data are unique. In contrast, the CDF function for a discrete distribution is a step function, which leads to duplicated quantiles and overplotting.

Quantile plots...are primarily used for continuous data. We would like to have a similar technique for graphically comparing the shapes of discrete distributions. Hoaglin and Tukey [1985] developed several plots to accomplish this [including]the Poissonness plot.

That sounds interesting! A future blog post will present an alternative way to visualize the fit of a Poisson model.