Last week I wrote about how to compute sample quantiles and weighted quantiles in SAS. As part of that article, I needed to draw some step functions. Recall that a step function is a piecewise constant function that jumps by a certain amount at a finite number of points.

The easiest way to visualize the ECDF in SAS is to use the CDFPLOT statement in PROC UNIVARIATE. The following DATA step creates a set of nine observations. Two values are repeated. The call to PROC UNIVARIATE creates a graph of the empirical CDF: 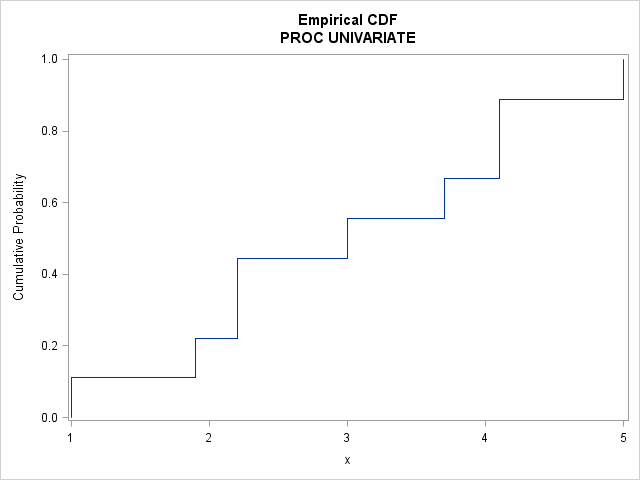 In the previous call to PROC UNIVARIATE, the ODS OUTPUT statement writes a SAS data set that contains the data values in sorted order and the value of the ECDF at each data value. You can use this output data set and the STEP statement in PROC SGPLOT to create your own graph of the ECDF. This gives you complete control over colors, labels, background grids, and other graphical attributes. You can also overlay other plots on the ECDF. For example, the following call to PROC SGPLOT creates an ECDF, adds a background grid, and overlays a fringe plot that shows individual data values: 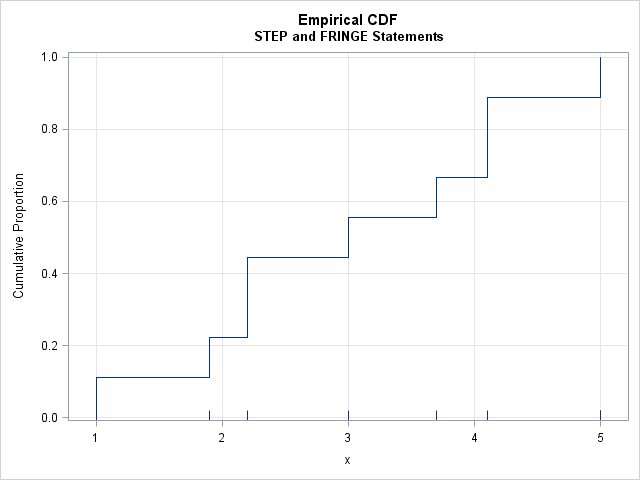 For the ECDF, we used PROC UNIVARIATE to create a data set that contains the (X,Y) coordinates of each "corner" in the plot. For a general discontinuous function, you need to create a similar data set manually. If you can create the data set, you can use the STEP statement to visualize an arbitrary piecewise constant function. 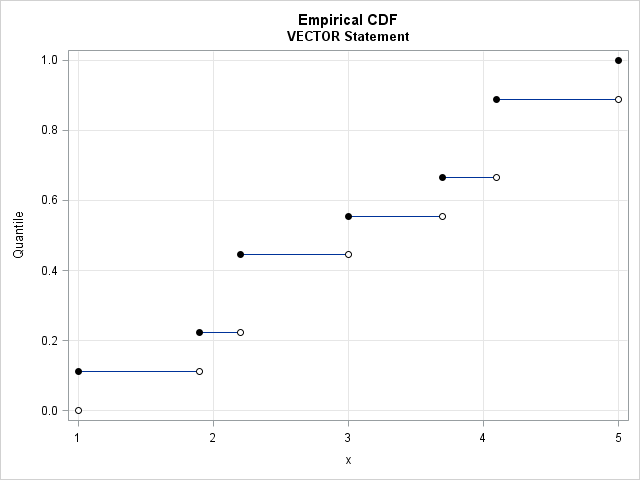 Some users might want to omit the vertical lines in the graph in order to emphasize the discontinuous nature of the function. For example, the adjacent graph is an alternative approach to visualizing the ECDF. This graph emphasizes that the function is constant on intervals that are closed on the left and open on the right. 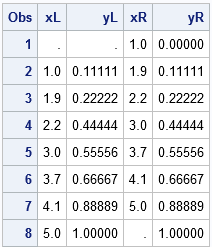 The adjacent table shows the shape of the data that is suitable for graphing with the VECTOR statement. You can see that the LAG function is useful for generating the xL column from the xR column. The yL and yR columns are identical except for the first observation because the ECDF is piecewise constant. The VECTOR statement connects the points (xL, yL) and (xR, yR), where the "L" subscript refers to left-hand endpoints and the "R" subscript refers to right-hand endpoints.