In a previous blog post, I showed how to overlay a prediction ellipse on a scatter plot in SAS by using the ELLIPSE statement in PROC SGPLOT. The ELLIPSE statement draws the ellipse by using a standard technique that assumes the sample is bivariate normal. Today's article describes the technique and shows how to use SAS/IML to compute a prediction ellipse from a 2 x 2 covariance matrix and a mean vector. This can be useful for plotting ellipses for subgroups, ellipses that correspond to robust covariance estimates, or an ellipse for a population (rather than for a sample).

SAS/IML routines for computing prediction ellipses have been around for a long time. A module called the CONTOUR module was in the version 6 (1989) documentation for SAS/IML. In version 6.12, the module was used to compare prediction ellipses for robust and classical covariance matrices. A module appears in Michael Friendly's 1991 book The SAS System for Statistical Graphics, and in several of his papers, including a 1990 SUGI article. Friendly continues to distribute the %ELLIPSES macro for displaying ellipses on scatter plots. The SAS/IML function in this article is similar to these earlier modules.

You can compute a prediction ellipse for sample data if you provide the following information:

The implicit formula for the prediction ellipse is given in the documentation for the CORR procedure as the set of points that satisfy a quadratic equation. However, to draw the ellipse, you should parameterize the ellipse explicitly. For example, when the axes of the ellipse are aligned with the coordinate axes, the equation of an ellipse with center (c,d) and with radii a and b is defined implicitly as the set of points (x,y) that satisfies the equation
(x-c)2 / a2 + (y-d)2 / b2 = 1.
However, if you want to draw the ellipse, the parametric form is more useful:
x(t) = c + a cos(t)
y(t) = d + b sin(t)
for t in the interval [0, 2π].

An algorithm to draw a prediction ellipse

I can think of two ways to draw prediction ellipses. One way is to use the geometry of Mahalanobis distance. The second way, which is used by the classical SAS/IML functions, is to use ideas from principal components analysis to plot the ellipse based on the eigendecomposition of the covariance matrix:

A SAS/IML module for computing a prediction ellipse

The following module accepts a vector of k confidence levels. The module returns a matrix with three columns. The meaning of each column is described in the comments.

The SAS/IML documentation includes an example in which a classical prediction ellipse is compared with a robust prediction ellipse for three-dimensional data that contain outliers. The following SAS/IML statements define the classical and robust estimates of location and scatter for two of the variables. The PredEllipseFromCov function is called twice: once for the classical estimates, which are based on all 21 observations, and once for the robust estimates, which are based on 17 observations: 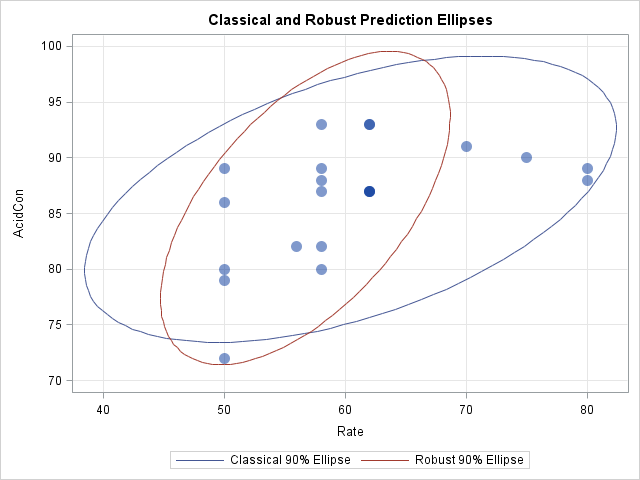 You can also use this module to overlay prediction ellipses for subgroups of the data. For example, you can compute the mean and covariance matrix for each of the three species of flower in the sashelp.iris data. You can download the complete program that computes the prediction ellipses and overlays them on a scatter plot of the data. The following graph shows the result: 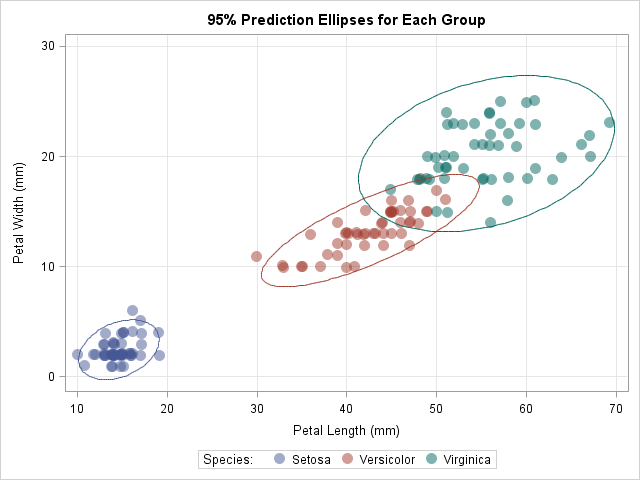 In summary, by using the SAS/IML language, you can write a short function that computes prediction ellipses from four quantities: a center, a covariance matrix, the sample size, and the confidence level. You can use the function to compute prediction ellipses for classical estimates, robust estimates, and subgroups of the data. You can use the POLYGON statement in PROC SGPLOT to overlay these ellipses on a scatter plot of the data.