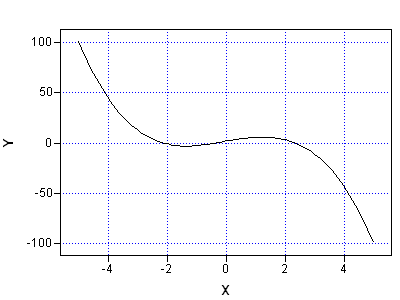 As of SAS/IML 12.1, there is an easy way to find the roots of function of one variable. The FROOT function solves for a root on a finite interval by using Brent’s method, which uses a combination of bisection, linear interpolation, and quadratic interpolation to converge to a root. Unlike Newton's method, Brent's method does not require that you specify a derivative for the function. All you need to provide is a module that evaluates the function, f, and an interval [a, b] such that f(a) and f(b) have different signs.

If there is a root in the interval, Brent's method is guaranteed to find it.

As an example, the following SAS/IML module defines a function that I investigated in a previous blog post:

The image at the beginning of this article shows the graph of the function on the interval [–5, 5]. The function has three roots. You can use the graph to estimate intervals on which the function contains a root. The FROOT function enables you to find multiple zeros with a single call, as follows:

That's all there is to it. So next time you need to solve a nonlinear equation of one variable, remember that the FROOT function in the SAS/IML language makes the task simple.