A vectorized computation is one in which a function operates on an entire vector of data, rather than on a single scalar quantity. This is efficient because it "pushes" the computation down in to the underlying C or FORTRAN code, rather than requiring the language interpreter to loop over many scalar elements.

For example, the SAS/IML language has functions for computing the product and cumulative product of a vector of values. The PROD function and CUPROD function perform these tasks:

The CUPROD function also enables me to compute multiple solutions to the birthday matching problem—without writing a single loop.

I also examine the birthday-matching problem in Chapter 13 of my book, Statistical Programming with SAS/IML Software, both under the assumption that birthdays are uniformly distributed throughout the year and also under an empirical distribution of birthdays by using data from the National Center for Health Statistics (NCHS). The empirical distribution incorporates seasonal effects, as well as the effect of holidays on US births.

Let QN be the probability that no one in the room has a matching birthday. Assuming that that the people in the room are chosen randomly from the population, the birthdays are independent of each other, and QN is just the product of the probabilities for each person. Therefore, the following statements compute the probability of "no matches" in rooms of size N for 1 ≤ N ≤ 50: 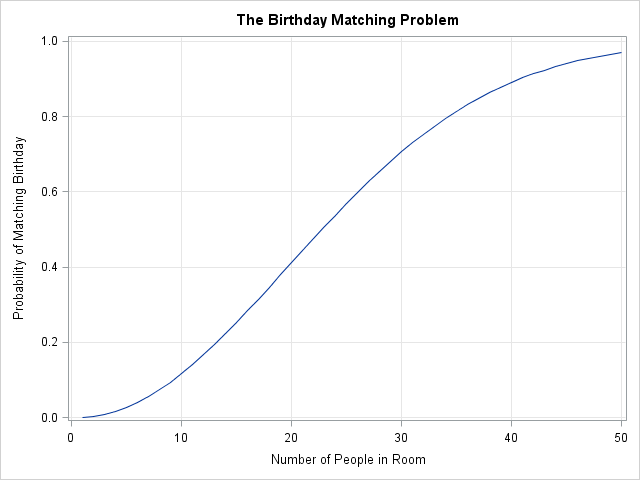