As a SAS developer, I am always looking ahead to the next release of SAS. However, many SAS customer sites migrate to new releases slowly and are just now adopting versions of SAS that were released in 2010 or 2011. Consequently, I want to write a few articles that discuss recent additions to the SAS/IML language, where "recent" goes back a few years. For the several Mondays, my "Getting Started" articles will review SAS/IML language features that were added in SAS/IML 9.22 (released in 2010) and SAS/IML 9.3 (released in 2011).

The MEAN function: Much more than sample means

Prior to SAS/IML 9.22, statistical programmers used the colon (:) subscript reduction operator to compute the arithmetic mean of data. For example, the following SAS/IML program computes the grand mean, the row means, and the column means of data in a 5x2 matrix: 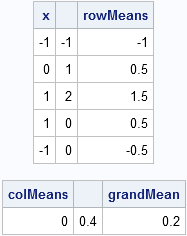 The MEAN function was introduced in SAS/IML 9.22. The expression mean(x) computes the arithmetic mean of each column of a matrix. It is equivalent to x[:,]. The MEAN function also supports trimmed and Winsorized means, which are robust estimators of location.

Because the MEAN function computes the arithmetic mean of each column of a matrix, you need to be careful when computing the mean of a vector. Make sure that the function argument it is a column vector, not a row vector. For example, the following statement does NOT compute the mean of the elements in the vector, g:

Instead, use the transpose function (T) or the COLVEC function so that the argument to the MEAN function is a column vector:

A previous article discusses the trimmed and Winsorized means and provides an example.

The VAR function for computing the sample variance

If you compute the variance of data in a vector, make sure that you pass a column vector to the VAR function.

The STD function for computing the sample standard deviation

The STD function (introduced in SAS 9.3) is simply the square root of the sample variance. As such, the STD function is merely a convenient shortcut for sqrt(var(x)):

Once again, if you compute the standard deviation of data in a vector, make sure that you pass a column vector to the STD function.