The syntax is simple. The following DATA step creates a data set that contains 10 random uniform numbers in the range (0,1):

The syntax for the SAS/IML program is similar, except that you can avoid the loop (vectorize) by allocating a vector and then filling all elements by using a single call to RANDGEN:

The same expression is valid in the DATA step and the SAS/IML language.

If you want random integers between 0 and Max or between Min and Max, the FLOOR function is more convenient:

For convenience, you can define a macro that returns a random integers between two values. Again, the same expressions are valid in the DATA step and the SAS/IML language.

Putting it all together

The following DATA step demonstrates all the ideas in this blog post and generates 1,000 random numbers in SAS. The values are uniformly distributed with various properties:

You can use the UNIVARIATE and FREQ procedures in Base SAS to see how closely the statistics of the sample match the characteristics of the populations. The PROC UNIVARIATE output is not shown, but the histograms show that the sample data for the u and x variables are, indeed, uniformly distributed on (0,1) and (-1,1), respectively. The PROC FREQ output shows that the k, n, and m variables contain integers that are uniformly distributed within their respective ranges. Only the output for the m variable is shown. 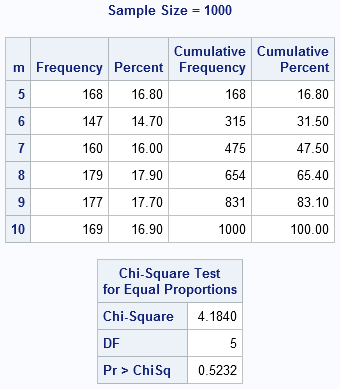 In summary, use the RAND("uniform") call to generate random numbers in SAS. By scaling and translating these values, you can obtain random values (decimal or integer) on any interval.