In many cases, the variable of interest is positive and the log transformation is immediately applicable. However, some quantities (for example, profit) might contain a few negative values. How do you handle negative values if you want to log-transform the data?

A common technique for handling negative values is to add a constant value to the data prior to applying the log transform. The transformation is therefore log(Y+a) where a is the constant. Some people like to choose a so that min(Y+a) is a very small positive number (like 0.001). Others choose a so that min(Y+a) = 1. For the latter choice, you can show that a = b – min(Y), where b is either a small number or is 1.

In the SAS/IML language, this transformation is easily programmed in a single statement. The following example uses b=1 and calls the LOG10 function, but you can call LOG, the natural logarithm function, if you prefer.

A criticism of the previous method is that some practicing statisticians don't like to add an arbitrary constant to the data. They argue that a better way to handle negative values is to use missing values for the logarithm of a nonpositive number.

The preceding approach is fine for the DATA step, but the DO loop is completely unnecessary in PROC IML. It is more efficient to use the LOC function to assign LogY, as shown in the following statements. 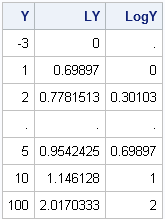 You can use the previous technique for other functions that have restricted domains. For example, the same technique applies to the SQRT function and to inverse trigonometric functions such as ARSIN and ARCOS.