Computing a covariance and correlation matrix with PROC CORR

The OutCorr data set contains various statistics about the data, as shown by running PROC PRINT: 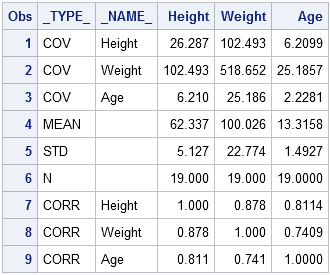 If you want to use the covariance or correlation matrix in PROC IML, you can read the appropriate values into a SAS/IML matrix by using a WHERE clause on the USE statement:

Notice that this SAS/IML code is independent of the number of variables in the data set.

Computation of the covariance and correlation matrix in PROC IML

If the data are in SAS/IML vectors, you can compute the covariance and correlation matrices by using matrix multiplication to form the matrix that contains the corrected sum of squares of cross products (CSSCP).

Suppose you are given p SAS/IML vectors x1, x2, ..., xp. To form the covariance matrix for these data:

This process assumes that there are no missing values in the data. Otherwise, it needs to be slightly amended. Formulas for various matrix quantities are given in the SAS/STAT User's Guide.

The following SAS/IML statements define a SAS/IML module that computes the sample covariance matrix of a data matrix. For this example the data are read from a SAS data set, so Step 1 (horizontal concatenation of vectors) is skipped. [Editor's Note 18AUG2011: In SAS 9.3 and beyond, use the built-in COV function.]

Computing the Pearson correlation matrix requires the same steps, but also that the columns of the centered data matrix be scaled to have unit standard deviation. SAS/IML software already has a built-in CORR function, so it is not necessary to define a Corr module, but it is nevertheless instructive to see how such a module might be written. [Editor's Note 18AUG2011: In SAS 9.3 and beyond, use the built-in CORR function.]

Computation of the covariance and correlation matrix in PROC IML (post-9.2)