The first syntax for the SELECT-WHEN statement

It sounds more difficult than it is, so let's see an example. The following SAS data set contains dates in 2020. Some of them are well-known religious holidays, others are US holidays, and others are "personal holidays" that I like to celebrate with my friends, such as Leap Day, Pi Day, Cinco de Mayo, and Halloween. The data set contains the date of the holiday and a name. You can use a SELECT-WHEN statement to classify each holiday as Religious, USA, or Personal, as follows: 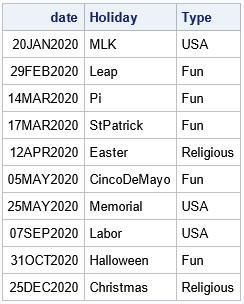 Notice that the SELECT statement branches on the expression UPCASE(Holiday). The new data set has a Type variable that classifies each holiday according to the value of UPCASE(Holiday).

By the way, if you have only the dates, you can still form the Type variable by using the HOLIDAYNAME function in SAS. This is left as an exercise.

As stated previously, the SELECT-WHEN statement provides the same functionality as an IF-THEN/ELSE statement, but it is a simpler way to handle multiple values. For example, the equivalent IF-THEN/ELSE logic is as follows:

The second syntax for the SELECT-WHEN statement

The first SELECT-WHEN syntax enables you to perform an action for any value of an expression. Usually, you will branch on values of a discrete variable.

The previous example uses the name of a holiday to assign values to the Type variable. Many holidays do not have fixed dates but rather dates that vary from year to year. For example, US Thanksgiving is the fourth Thursday of November, and MLK Day is the third Monday of January. Easter is even more complicated. Luckily, SAS provides the HOLIDAY function, which enables you to obtain the dates of common holidays for each year. For each date in the data set, you can use the HOLIDAY function to determine whether the date corresponds to a religious or USA holiday. The following SELECT-WHEN statement shows how to implement the second syntax: 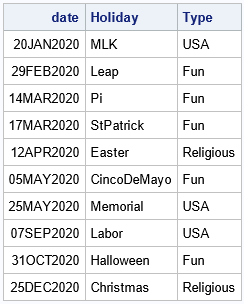 This syntax for the SELECT-WHEN statement looks even more like an IF-THEN/ELSE statement.

On discussion forums, I see a lot of questions like this example in which programmers are creating a new variable from the values of an existing variable. In simple situations, you can use PROC FORMAT to perform this task. For more complicated situations, you can even define your own function to use as a format.