John Tukey was an influential statistician who proposed many statistical concepts. In the 1960s and 70s, he was fundamental in the discovery and exposition of robust statistical methods, and he was an ardent proponent of exploratory data analysis (EDA). In his 1977 book, Exploratory Data Analysis, he discussed a small family of power transformations that you can use to explore the relationship between two variables. Given bivariate data (x1, y1), (x2, y2), ..., (xn, yn), Tukey's transformations attempt to transform to the Y values so that the scatter plot of the transformed data is as linear as possible, and the relationship between the variables is simple to explain.

Although Tukey's transformation is defined for all values of the parameter, λ, he argues for using values that result in simple relationships such as integer powers (squares and cubes), logarithms, and reciprocal power laws such as inverse-square laws. Thus, he simplified the family to the following small set of useful transformations: 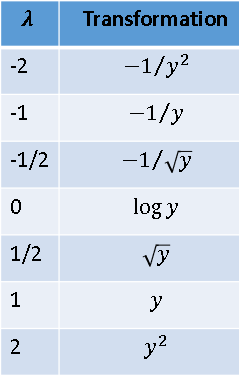 A graphical method for Tukey's transformation

Tukey proposed many graphical techniques for exploratory data analysis. To explore whether a transformation of the Y variable results in a nearly linear relationship with the X variable, he suggests plotting the data. This is easily performed by using a SAS DATA step to transform the Y variable for each value of λ in the set {-2, -1, -1/2, 0, 1/2, 1, 2}. To ensure that the transformation only uses positive values, the following program adds c = 1 - min(Y) to each value of Y before transforming. The resulting scatter plots are displayed by using PROC SGPANEL.

The panel of scatter plots shows seven transformations of the Y variable plotted against X. It is difficult to visually discern which plot is "most linear." The graph for λ=0 seems to be most linear, but the scatter plot for λ=0.5 also have very little curvature.

An analytical method for Tukey's transformation

Tukey emphasized graphical methods in Exploratory Data Analysis (1977), but his ladder of transformations has a rigorous statistical formulation. The correlation coefficient is a measure of linearity in a scatter plot, so for each value of λ you can compute ρλ = corr(X, T(Y; λ)), where T(Y; λ) is the Tukey transformation for the parameter λ. The value of λ that results in the correlation that has the largest magnitude (closest to ±1) is the optimal parameter. In SAS, you can sort the transformed data by the Lambda variable and use PROC CORR to compute the correlation for each parameter value: