On Twitter, I saw a tweet from @DataSciFact that read, "The sum of (x_i - x)^2 over a set of data points x_i is minimized when x is the sample mean." I (@RickWicklin) immediately tweeted out a reply: "And the sum of |x_i - x| is minimized by the sample median!"

It occurred to me that you can write a simple SAS program that demonstrates the @DataSciFact tweet and my response. This article creates graphs that show that the sample mean is the value that minimizes a quadratic loss function. Similarly, the sample median minimizes an absolute-difference loss function.

This demonstration can be surprising to students of statistics. In a beginning statistics course, the mean is presented in terms of a formula for an average. The median is defined as the midpoint of the set of ordered data values. It is not clear from these definitions that these estimates minimize some loss function.

Get the plotting range from the data

When you plot a function, you need to decide on the domain for the plot. Let's plot Q(t) on a domain that is centered at m, the mean of the data. A good choice is m ± s, where s is the standard deviation of the data. Similarly, you can plot A(t) on an interval that includes the median. One possible choice is the interquartile range [Q1, Q3], where Q1 is the first quartile (25th percentile) and Q3 is the third quartile (75th percentile).

The following SAS statements call PROC MEANS to obtain the mean, standard deviation, and quartile of the data. I will use the MPG_City variable is the SasHelp.Cars data set, but you can modify the program to use any other data set and any other numerical variable. A subsequent DATA step creates macro variables that contain the statistics:

The data set contains the ordered pairs for each loss function. The following call to PROC SGPLOT graph the quadratic function on its domain: 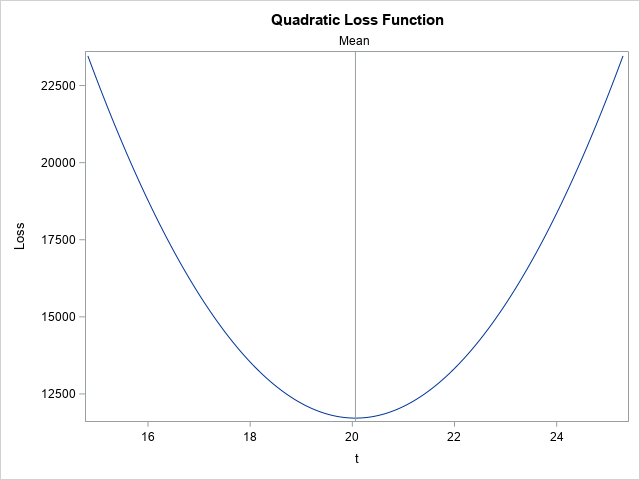 As promised, the quadratic loss function achieves a minimum value at t=20.06, which is the sample mean of the data. In this sense, the mean is a "least squares" minimizer. The graph shows that the sample mean is the value of t that minimizes the sum of the squared residuals between the data and t.

Next, let's graph the loss function for the absolute differences: 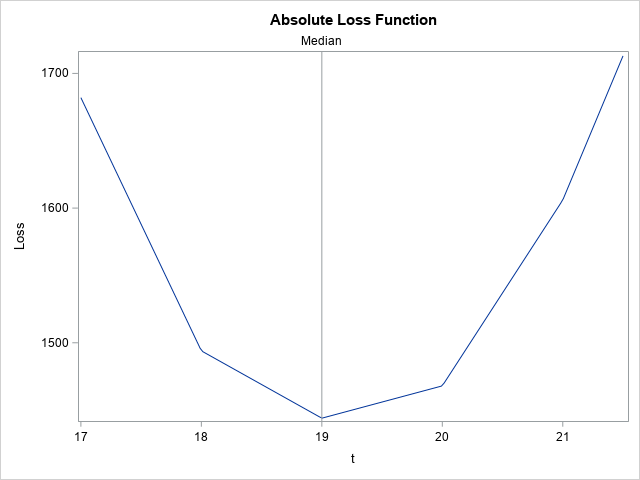 As promised, the absolute-difference loss function achieves a minimum value at t=19, which is the sample median of the data. In this sense, the median is the value of t that minimizes the sum of the magnitude of the residuals between the data and t. Notice that this graph is not smooth. It is piecewise linear between each data value. 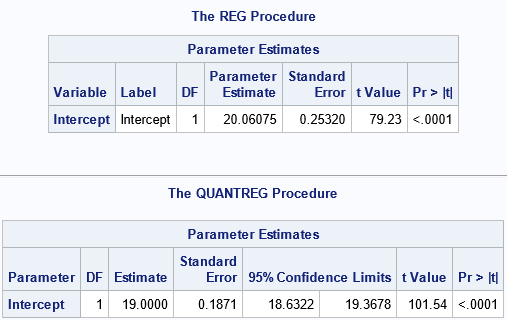