A common question on SAS discussion forums is how to randomly assign observations to groups. An application of this problem is assigning patients to cohorts in a clinical trial. For example, you might have 137 patients that you want to randomly assign to three groups: a control group, a group that gets an established treatment, and a group that gets a new treatment. Random assignment tends to produce groups in which patients who have confounding factors (obesity, high blood pressure, and other pre-existing conditions) are distributed equally across the groups.

There are many ways to perform a random assignment in SAS, including the DATA step and PROC PLAN. However, my favorite procedure for random assignment is to use the GROUPS= option in PROC SURVEYSELECT. This article shows three ways to assign subjects to groups:

In the simplest situation, you want to randomly assign N subjects to G groups so that the group sizes are as equal as possible. If G divides N, you can make the groups equal in size. Otherwise, one or more groups will have one more subject than the others.

Suppose that you have N=137 patients to assign to G=3 groups. Because 137 is a prime number, the groups cannot be equal. The following DATA step extracts 137 patients from the Sashelp.Heart data set. The call to PROC SURVEYSELECT uses the GROUP=3 option to randomly assign the patients to three groups. The output data set contains a new indicator variable that is named GroupID and has the values 1, 2, or 3. The call to PROC FREQ shows that the subjects are (nearly) equally divided among the three groups:

As stated earlier, a benefit of random assignment is that covariate values have nearly identical distributions in each group. For example, the following statements create a box plot of the Cholesterol variable. The distribution of Cholesterol values seems to be similar in the three groups. 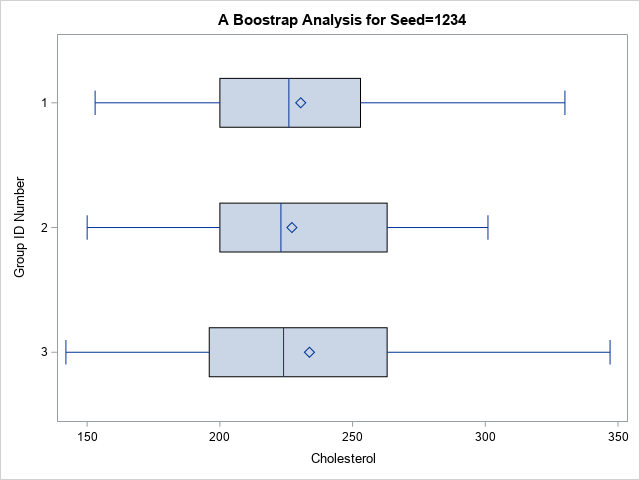 Sometimes the subjects have additional categorical characteristics such as Sex or Race. You might want to randomly assign subjects within each category. For example, these data contain 86 females and 51 males. The following call to PROC SURVEYSELECT uses the STRATA statement to separately assign the females to three groups (sizes are 28, 29, and 29) and the males to three groups (sizes are 17). To use the STRATA statement, you need to sort the data by the Sex variable, as follows: 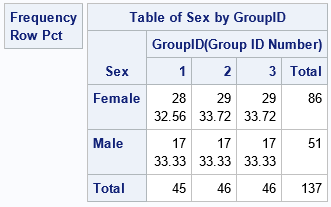 The output from PROC FREQ shows that the random assignment is as even as possible within the males and within the females, separately, with about 33% of each gender in each group.

In some situations, you might not want an equal number of subjects in each group. For example, you might want to assign fewer subjects to the control group and more to the experimental groups. The GROUP= option supports a list of sample sizes. The following call to PROC SURVEYSELECT randomly assigns 40 subjects to each of the first two groups and 57 subjects to the third group:

The output from PROC FREQ verifies that the sample sizes for the three groups are as specified on the GROUP= list.