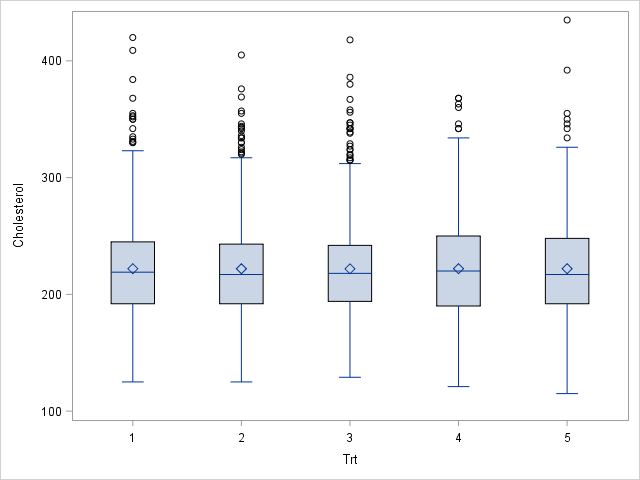 A frequently asked question on SAS discussion forums concerns randomly assigning units (often patients in a study) to various experimental groups so that each group has approximately the same number of units. This basic problem is easily solved in SAS by using PROC SURVEYSELECT or a DATA step program.

A more complex problem is when the researcher wants the distribution of a covariate to be approximately equal for each group. For example, a medical researcher might want each group of patients to have approximately the same mean and variance for their cholesterol levels, as shown in the plot to the right. This second problem is much harder because it involves distributing the units (non-randomly) so that the groups satisfy some objective. Conceptually, you want an assignment that minimizes the difference between moments (mean, variance, skewness,...) of the subgroups.

The OPTEX procedure for optimal design

To solve this assignment problem with PROC OPTEX, you need to specify three things:

The following statements create the two data sets and define a macro variable that contains the name of the Cholesterol variable:

As discussed in the PROC OPTEX documentation, the following call creates an output data set (named GROUPS) that assigns each patient to a group (1–5). A call to PROC MEANS displays the mean and variance of each group. 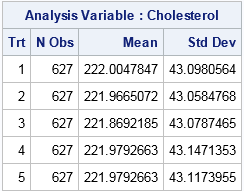 In summary, the OPTEX procedure in SAS/QC software enables you to assign units to groups, where each group has approximately the same distribution of a specified covariate. In this article, the covariate measured cholesterol levels in patients, but you can also group individuals according to income, scholastic aptitude, and so on. For large data sets, the assignment problem is a challenging optimization problem, but PROC OPTEX provides a concise syntax and solves this problem efficiently.