The SURVEYSELECT procedure in SAS 9.4M5 supports the OUTRANDOM option, which causes the selected items in a simple random sample to be randomly permuted after they are selected. This article describes several statistical tasks that benefit from this option, including simulating card games, randomly permuting observations in a DATA step, assigning a random ID to patients in a clinical study, and generating bootstrap samples. In each case, the new OUTRANDOM option reduces the number of statements that you need to write. The OUTRANDOM option can also be specified by using OUTORDER=RANDOM.

Often when you draw a random sample (with or without replacement) from a population, the order in which the items were selected is not important. For example, if you have 10 patients in a clinical trial and want to randomly assign five patients to the control group, the control group does not depend on the order in which the patients appear on some list. Similarly, in simulation studies, many statistics (means, proportions, standard deviations,...) depend only on the sample, not on the order of the numbers in the sample. For these reasons, and for efficiency, the SURVEYSELECT procedure in SAS usually outputs the selected observations in the same order that they appear in the "population" (DATA=) data set. 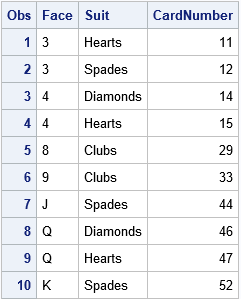 Notice that the call to PROC SURVEYSELECT did not use the OUTRANDOM option. Consequently, the cards are in the same order as they appear in the input data set. This ordering of the sample is adequate if you want to simulate dealing hands and estimate probabilities of pairs, straights, flushes, and so on. However, if your simulation requires the cards to be in a random order (for example, you want the first five observations to represent the first player's cards), then clearly this ordering is inadequate and needs an additional random permutation of the observations. That is exactly what the OUTRANDOM option provides, as shown by the following call to PROC SURVEYSELECT: 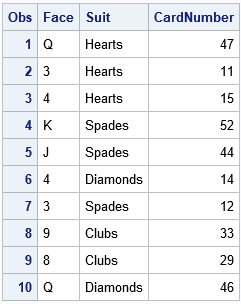 You can use this sample when the output needs to be in a random order. For example, in a poker simulation, you can now assign the first five cards to the first player and the second five cards to a second player.

Permute the observations in a data set

A second application of the OUTRANDOM option is to permute the rows of a SAS data set. If you sample without replacement and request all observations (SAMPRATE=1), you obtain a copy of the original data in random order. For example, the students in the Sashelp.Class data set are listed in alphabetical order by their name. The following statements use the OUTRANDOM option to rearrange the students in a random order: 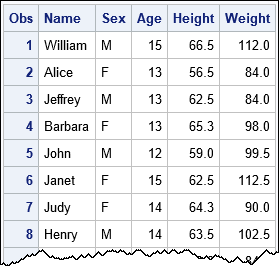 There are many other ways to permute the rows of a data set, such as adding a uniform random variable to the data and then sorting. The two methods are equivalent, but the code for the SURVEYSELECT procedure is shorter to write.

Assign unique random IDs to patients in a clinical trial

Another application of the OUTRANDOM option is to assign a unique random ID to participants in an experimental trial. For example, suppose that four-digit integers are used for an ID variable. Some clinical trials assign an ID number sequentially to each patient in the study, but I recently learned from a SAS discussion forum that some companies assign random ID values to subjects. One way to assign random IDs is to sample randomly without replacement from the set of all ID values. The following DATA step generates all four-digit IDs, selects 19 of them in random order, and then merges those IDs with the participants in the study: 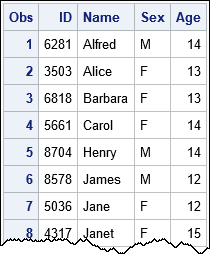 Random order for other sampling methods

The OUTRANDOM option also works for other sampling schemes, such as sampling with replacement (METHOD=URS, commonly used for bootstrap sampling) or stratified sampling. If you use the REPS= option to generate multiple samples, each sample is randomly ordered.

It is worth mentioning that the SAMPLE function in SAS/IML also can to perform a post-selection sort. Suppose that X is any vector that contains N elements. Then the syntax SAMPLE(X, k, "NoReplace") generates a random sample of k elements from the set of N. The documentation states that "the elements ... might appear in the same order as in X." This is likely to happen when k is almost equal to N. If you need the sample in random order, you can use the syntax SAMPLE(X, k, "WOR") which adds a random sort after the sample is selected, just like PROC SURVEYSELECT does when you use the OUTRANDOM option.