The ranks of a set of data values are used in many nonparametric statistics and statistical tests. When you request a statistic or nonparametric test in SAS, the procedure will automatically compute the ranks that are needed. However, sometimes it is useful to know how to compute the ranks yourself. This article shows how to compute ranks in SAS when the data contains repeated values, which result in tied ranks. The article shows how to use PROC RANK as well as the RANKTIE function in SAS/IML software.

What are tied ranks?

When the data contains duplicate values, you must decide how to assign ranks to the tied values. All tied values should have the same rank, but what rank should you assign? There are several ways to handle ties, but the most common way is to assign the average rank of the tied values. This is advantageous in statistical tests because it preserves the sum of the ranks. For example, in the data {18, 13, 18, 16}, the "average rank" method would assign the ranks {3.5, 1, 3.5, 2} because the third and fourth sorted values are the same. Therefore, the average rank is (3 + 4)/2 = 3.5. Notice that the sum of the ranks is 10, which equals the sum of the integers 1:n, where n=4.

There are four common methods for handling ties. Suppose there are k tied values. If you sort the data, the tied values will appear in the ordinal positions R, R+1, ..., R+k-1.

In SAS, you can compute ranks by using the RANKTIE function in SAS/IML, or you can use PROC RANK in Base SAS. Both methods support the four methods for handling ties. The default method is the mean method.

You can use the RANKTIE function in PROC IML to compute tied ranks, as follows: 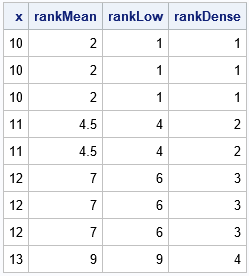 The result shows three of the four methods:

For simplicity, the previous example lists the data in sorted order. However, the tied ranks will be the same regardless of the order of the values. For example, the following statements use the same values but change the order of the observations. The ranks are the same: 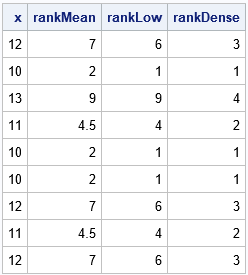 Although PROC RANK supports the TIES= option to specify the MEAN, LOW, HIGH, or DENSE methods, you can only use one method at a time. Therefore, the following program calls PROC RANK three times and concatenates the outputs into a single data set: 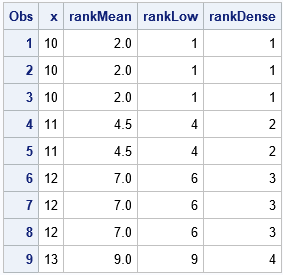 The result is the same as for the RANKTIE function in SAS/IML. In practice, you typically apply only one method for handling ties, so you only need to call PROC RANK once.

Many statistics and statistical tests use ranks. When the data contain duplicate values, the ranks are not unique. You must choose a way to assign ranks to the tied values. This article discusses four ways to compute tied ranks in SAS. Computations are shown by using PROC IML and PROC RANK.