The geometry of correlation and least-square regression

This is shown graphically in the following figure. The vector z is not in the span of the explanatory variables. The vector w is the projection of z onto the linear subspace. As explained in the previous article, you can find a vector y such that the angle between y and w is θ, where cos(θ) = ρ. Equivalently, the correlation between y and w is ρ.

Correlation between a response vector and a predicted vector

The generalization to multivariate linear regression is that the R-square statistic is the square of the correlation between the predicted response and the observed response. Therefore, you can use the technique in this article to create a response variable that has a specified R-square value in a linear regression model.

The following program shows how to carry out this algorithm in the SAS/IML language:

The program uses a random guess to generate a vector Y such that the correlation between Y and the least-squares prediction for Y is exactly 0.543. In other words, if you run a regression model where Y is the response and (X1, X2, X3) are the explanatory variables, the R-square statistic for the model will be ρ2 = 0.2948. Let's write the Y variable to a SAS data set and run PROC REG to verify this fact: 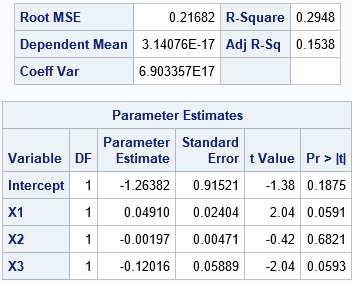 Many textbooks point out that the R-square statistic in multivariable regression has a geometric interpretation: It is the squared correlation between the response vector and the projection of that vector onto the linear subspace of the explanatory variables (which is the predicted response vector). You can use the program in this article to solve the inverse problem: Given a set of explanatory variables and correlation, you can find a response variable for which the R-square statistic is exactly the squared correlation.

You can download the SAS program that computes the results in this article.