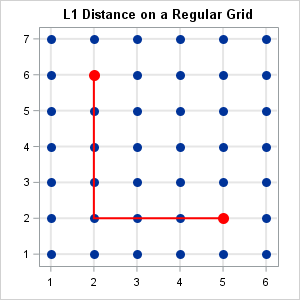 Given a rectangular grid with unit spacing, what is the expected distance between two random vertices, where distance is measured in the L1 metric? (Here "random" means "uniformly at random.") I recently needed this answer for some small grids, such as the one to the right, which is a 7 x 6 grid. The graph shows that the L1 distance between the points (2,6) and (5,2) is 7, the length of the shortest path that connects the two points. The L1 metric is sometimes called the "city block" or "taxicab" metric because it measures the distance along the grid instead of "as the bird flies," which is the Euclidean distance.

Although I don't know a formula for the expected distance on a discrete regular grid, the grids in my application were fairly small so this article shows how to compute all pairwise distances and explicitly find the average (expected) value. The DISTANCE function in SAS/IML makes the computation simple because it supports the L1 metric. It is also simple to perform computer experiments to show that among all grids that have N*M vertices, the grid that is closest to being square minimizes the expected L1 distance.

L1 distance on a regular grid

An N x M grid contains NM vertices. Therefore the matrix of pairwise distances is NM x NM. Without loss of generality, assume that the vertices have X coordinates between 1 and N and Y coordinates between 1 and M. Then the following SAS/IML function defines the distance matrix for vertices on an N x M grid. To demonstrate the computation, the distance matrix for a 4 x 4 grid is shown, along with the average distance between the 16 vertices: 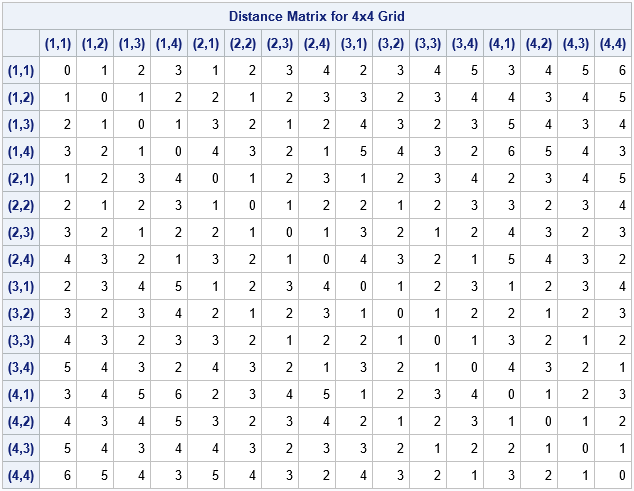 For an N x M grid, the L1 diameter of the grid is the L1 distance between opposite corners. That distance is always (N-1)+(M-1), which equates to 6 units for a 4 x 4 grid. As for the continuous case, the expected L1 distance is less than half the diameter. In this case, E(L1 distance) = 2.5.

A comparison of distances for grids of different aspect ratios

As indicated previously, the expected distance between two random vertices on a grid depends on the aspect ratio of the grid. A grid that is nearly square has a smaller expected distance than a short-and-wide grid that contains the same number of vertices. You can illustrate this fact by computing the distance matrices for grids that each contain 36 vertices. The following computation computes the distances for five grids: a 1 x 36 grid, a 2 x 18 grid, a 3 x 12 grid, a 4 x 9 grid, and a 6 x 6 grid. 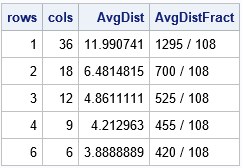 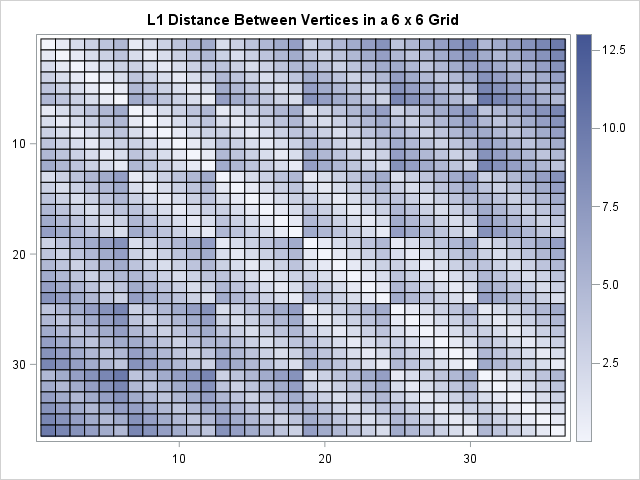 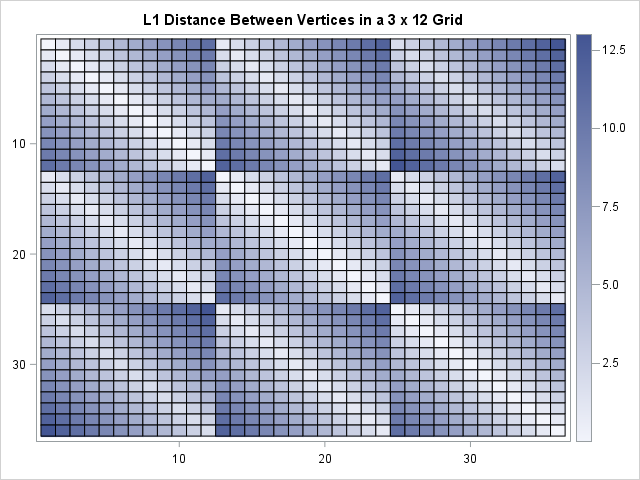 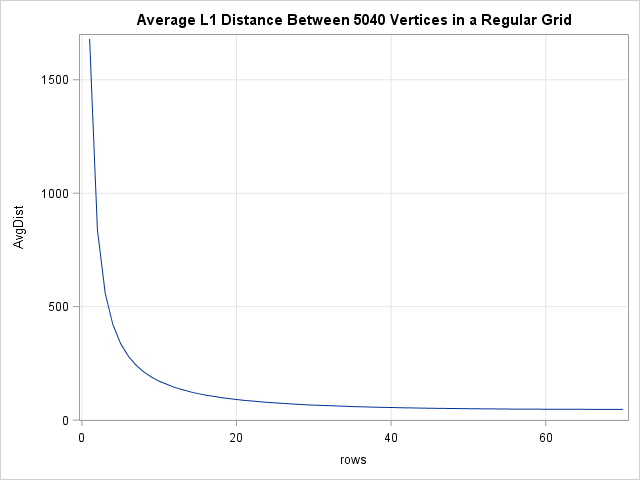 In summary, you can use the DISTANCE function in SAS/IML to explicitly compute the expected L1 distance (the "city block" distance) between random points on a regular grid. You can minimize the average pairwise distance by making the grid as square as possible.

City planning provides a real-world application of the L1 distance. If you are tasked with designing a city with N buildings along a grid, then the average distance between buildings is smallest when the grid is square. Of course, in practice, some buildings have a higher probability of being visited than others (such as a school or a grocery). You should position those buildings in the center of town to shorten the average distance that people travel.