In a previous blog post, I discussed ways to produce statistically independent samples from a random number generator (RNG). The best way is to generate all samples from one stream. However, if your program uses two or more SAS DATA steps to simulate the data, you cannot use the same seed value multiple times because that could introduce biases into your study. An easy way to deal with this situation is to use the CALL STREAM subroutine to set different key values for each DATA step.

Suppose that you have a simulation that needs to call the DATA step twice, and each call generates random numbers. If you want to encapsulate that functionality into a macro call, you might want to pass in the seed for the random number streams. An INCORRECT approach is to do the following:

This code is unacceptable because the same seed value and RNG are used for both DATA steps. That means that the stream of random numbers is the same for the second DATA step as for the first, which can lead to correlations that can bias your study.

Use the CALL STREAM subroutine

SAS 9.4M5 introduced new random number generators. The Mersenne twister algorithm supports one parameter (the seed) which initializes each stream. The Threefry and PCG algorithms support two initialization parameters. To prevent confusion, the first parameter is called the seed value and the second is called the key value. By default, the key value is zero, but you can use the CALL STREAM subroutine to set a positive key value.

You should use the key value (not the seed value) to generate independent streams in two DATA steps. The following statements are true:

The following example modifies the previous macro to use the CALL stream routine. For the PCG RNG, two streams that have the same seed and different key values do not overlap:

Of course, this situation generalizes. If the macro uses three (or 10 or 20) DATA steps, each of which generates random numbers, you can use a different key value in each DATA step. If you initialize each DATA step with the same seed and a different key, the DATA steps generate independent streams (for the Threefry and PCG RNGs) or generate independent streams with high probability (for the Mersenne twister RNG).

This section provides a real-life example of using the CALL STREAM subroutine. Suppose a researcher wants to create a macro that simulates many samples for a regression model. The macro first creates a data set that contains p independent continuous variables. The macro then simulates B response variables for a regression model that uses the independent variables from the first data set.

For a discussion of how the simulation works, see the article "Simulate many samples from a linear regression model." In this example, the macro uses two DATA steps to simulate the regression data. The second DATA step uses the STREAM subroutine to ensure that the random numbers it generates are different from those used in the first DATA step.

For completeness, here's how you can call the macro to generate the data and then a call PROC REG with a BY statement to analyze the 1,000 regression models. 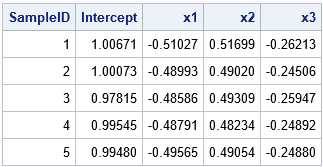 You can verify that the macro generates different simulated data if you use the same seed value but change the key value in the macro call.

In summary, this article shows that you can use the STREAM call in the SAS DATA step to generate different random number streams from the same seed value. For many simulation studies, the STREAM subroutine is not necessary. However, it useful when the simulation is run in stages or is implemented in modules that need to run independently.