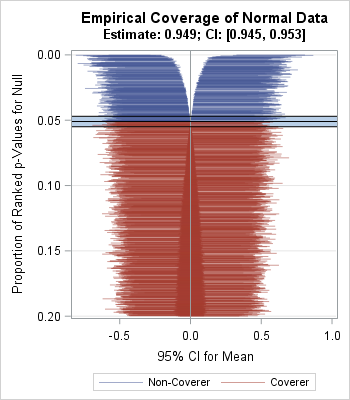 I saw the zipper plot in a tutorial about how to design, implement, and report the results of simulation studies (Morris, White, Crowther, 2017). An example of a zipper plot is shown to the right. The main difference between the zipper plot and the usual plot of confidence intervals is that the zipper plot sorts the intervals by their associated p-values, which causes the graph to look like a garment's zipper. The zipper plot in this blog post is slightly different from the one that is presented in Morris et al. (2017, p. 22), as discussed at the end of this article.

A formulas for a confidence interval (CI) is based on an assumption about the distribution of the parameter estimates on a simple random sample. For example, the two-sided 95% confidence interval for the mean of normally distributed data has upper and lower limits given by the formula
x̄ ± t* s / sqrt(n)
where x̄ is the sample mean, s is the sample standard deviation, n is the sample size, and t* is the 97.5th percentile of the t distribution with n – 1 degrees of freedom. You can confirm that the formula is a 95% CI by simulating many N(0,1) samples and computing the CI for each sample. About 95% of the samples should contain the population mean, which is 0. 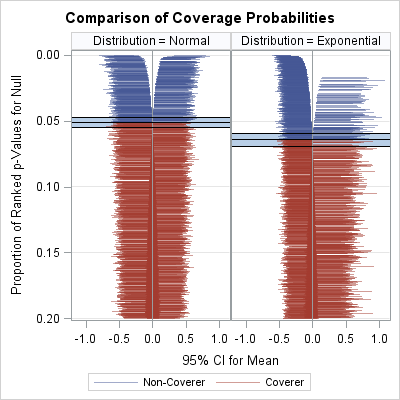 The graph to the right shows the zipper plot applied to the results of the two simulations in the previous article. The zipper plot on the left visualizes the estimate of the coverage probability 10,000 for normal samples of size n = 50. (The graph at the top of this article provides more detail.) The Monte Carlo estimate of the coverage probability of the CIs is 0.949, which is extremely close to the true coverage of 0.95. The Monte Carlo 95% confidence interval, shown by a blue band, is [0.945, 0.953], which includes 0.95. You can see that the width of the confidence intervals does not seem to depend on the sample mean: the samples whose means are "too low" tend to produce intervals that are about the same length as the intervals for the samples whose means are "too high."

The zipper plot on the right is for 10,000 random samples of size n = 50 that are drawn from an exponential distribution with mean 0 and unit scale parameter. (The graph at this link provides more detail.) The Monte Carlo estimate of the coverage probability is 0.9360. The Monte Carlo 95% confidence interval, shown by a blue band, is [0.931, 0.941] and does not include 0.95. Notice that the left side of the "zipper" tends to contain intervals that are shorter than those on the right side. This indicates that samples whose means are "too low" tend to produce shorter confidence intervals than the samples whose means are "too high."

If you want to experiment with the zipper plot or use it for your own simulation studies in SAS, you can download the SAS program that generates the graphs in this article.

Differences from the "zip plot" of Morris et al.

There are some minor differences between the zipper plot in this article and the graph in Morris et al. (2017, p. 22).