This article gives several examples of using the FIRST.variable and LAST.variable indicator variables for BY-group analysis in the SAS DATA step. The first example shows how to compute counts and cumulative amounts for each BY group. The second example shows how to compute the time between the first and last visit of a patient to a clinic, as well as the change in a measured quantity between the first and last visit. BY-group processing in the DATA step is a fundamental operation that belongs in every SAS programmer's tool box.

Use FIRST. and LAST. variables to find count the size of groups

The first example uses data from the Sashelp.Heart data set, which contains data for 5,209 patients in a medical study of heart disease. The data are distributed with SAS. The following DATA step extracts the Smoking_Status and Weight variables and sorts the data by the Smoking_Status variable:

The following DATA step defines a variable named Count and initializes Count=0 at the beginning of each BY group. For every observation in the BY group, the Count variable is incremented by 1. When the last record in each BY group is read, that record is written to the Count data set. 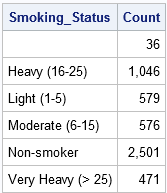 The same technique enables you to accumulate values of a variable within a group. For example, you can accumulate the total weight of all patients in each smoking group by using the following statements:

This same technique can be used to accumulate revenue from various sources, such as departments, stores, or regions.

Use FIRST. and LAST. variables to compute duration of treatment

Another common use of the FIRST.variable and LAST.variable indicator variables is to determine the length of time between a patient's first visit and his last visit. Consider the following DATA step, which defines the dates and weights for four male patients who visited a clinic as part of a weight-loss program:

For these data, you can sort by the patient ID and by the date of visit. After sorting, the first record for each patient contains the first visit to the clinic and the last record contains the last visit. You can subtract the patient's weight for these dates to determine how much the patient gained or lost during the trial. You can also use the INTCK function to compute the elapsed time between visits. If you want to measure time in days, you can simply subtract the dates, but the INTCK function enables you to compute duration in terms of years, months, weeks, and other time units.

The output data set summarizes each patient's activities at the clinic, including his average weight loss and the duration of his treatment.

Some programmers think that the FIRST.variable and LAST.variable indicator variables require that the data be sorted, but that is not true. The temporary variables are created whenever you use a BY statement in a DATA step. You can use the NOTSORTED option on the BY statement to process records regardless of the sort order.

In summary, the BY statement in the DATA step automatically creates two indicator variables. You can use the variables to determine the first and last record in each BY group. Typically the FIRST.variable indicator is used to initialize summary statistics and to remember the initial values of measurement. The LAST.variable indicator is used to output the result of the computations, which often includes simple descriptive statistics such as a sum, difference, maximum, minimum, or average values.

BY-group processing in the DATA step is a common topic that is presented at SAS conferences. Some authors use FIRST.BY and LAST.BY as the name of the indicator variables. For further reading, I recommend the paper "The Power of the BY Statement" (Choate and Dunn, 2007). SAS also provides several samples about BY-group processing in the SAS DATA step, including the following: