Did you know that SAS can combine or "merge" a symbol and a line pattern into a single legend item, as shown below? This kind of legend is useful when you are overlaying a group of curves onto a scatter plot. It enables the reader to quickly associate values of a categorical variable with colors, line patterns, and marker symbols in a plot.

When you use PROC SGPLOT and the GROUP= option to create a graph, the SGPLOT procedure automatically displays the group attributes (such a symbol, color, and line pattern) in a legend. If you overlay multiple plot types (such as a series plot on a scatter plot) the default behavior is to create a legend for the first plot statement. You can use the KEYLEGEND statement to control which plots contribute to the legend. In the following example, the KEYLEGEND statement creates a legend that shows the attributes for the scatter plot (the marker shapes) and also the series plot (line patterns): 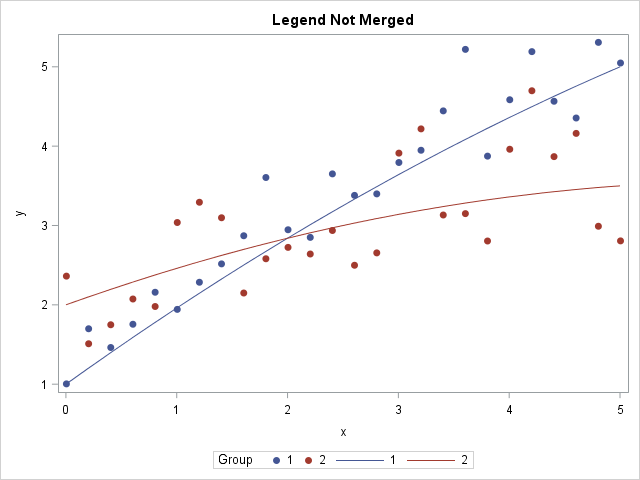 The legend contains all the relevant information about symbols, colors, and line patterns, but it is longer than it needs to be. When you display curves and markers for the same groups, you can obtain a more compact representation by merging the symbols and line patterns into a single legend, as shown in the next sections.

The MERGEDLEGEND statement in GTL

If you are comfortable with the Graph Template Language (GTL) in SAS, then you can use the MERGEDLEGEND statement to create a merged legend. The following statements create a graph template that overlays a scatter plot and a series plot and creates a merged legend in which each item contains both a symbol and a line pattern: 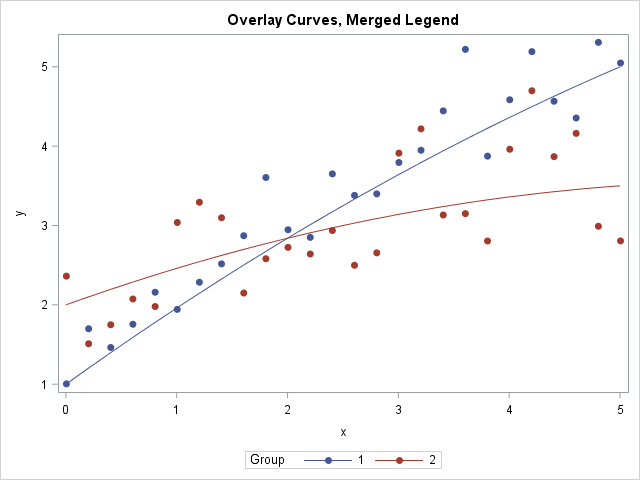 The graph is the same as before, but the legend is different. The MERGEDLEGEND statement is used in many graphs that are created by SAS regression procedures. As you can see, the legend shows the symbol and line pattern for each group.

The LEGENDITEM statement in PROC SGPLOT

Unfortunately, the MERGEDLEGEND statement is not supported by PROC SGPLOT. However, SAS 9.4M5 supports the LEGENDITEM statement in PROC SGPLOT. The LEGENDITEM statement enables you to construct a custom legend and gives you complete control over every item in a legend. The following example constructs a legend that uses the symbols, line patterns, and group values that are present in the graph. Notice that you have to specify these attributes manually, as shown in the following example:

The graph and legend are identical to the previous graph and are not shown.

In summary, the SG procedures in SAS automatically create a legend. When you overlay multiple plots, you can use the KEYLEGEND statement to control which plots contribute to the legend. However, it is also possible to merge the symbols and line patterns into a single compact legend. In the GTL, you can use the MERGEDLEGEND statement. In SAS 9.4M5, PROC SGPLOT supports the LEGENDITEM statement to customize the items that appear in a legend.