When you implement a statistical algorithm in a vector-matrix language such as SAS/IML, R, or MATLAB, you should measure the performance of your implementation, which means that you should time how long a program takes to analyze data of varying sizes and characteristics. There are some general tips that can help you eliminate bottlenecks in your program so that your program is fast as lightning! In fact, it is a little bit frightening how quickly you can become an expert in timing.

The following general principles apply regardless of the language that you use to implement the algorithm:

Timing the performance of algorithms in SAS/IML

This article is motivated by an R programmer who was trying to find the fastest way (on average) to check whether a vector contains more than one unique value. The programmer was timing the performance of five different methods in R in hopes of finding the fastest. I will use the same example, but will examine only two SAS/IML methods:

The ALL function should be fast to discard non-constant vectors because it a "short-circuiting" operation. That is, as soon as it detects two different values, it returns 0 (false). If you have a vector with 100,000 elements, the ALL function might only examine a small number of elements to determine that the vector is not constant. In contrast, the UNIQUE function should be relatively slow: it always examines all the elements, and it allocates memory to return a sorted list of all unique values.

The following program illustrates many of the best practices. It constructs random binary vectors that contain between 100,000 and 1 million elements. Most elements are 0, but there is a small probability that an element could be 1. Some of the vectors will contain a 1 near the beginning of the vector (the best case for the ALL function), others will contain a 1 near the end (the worst case for ALL). 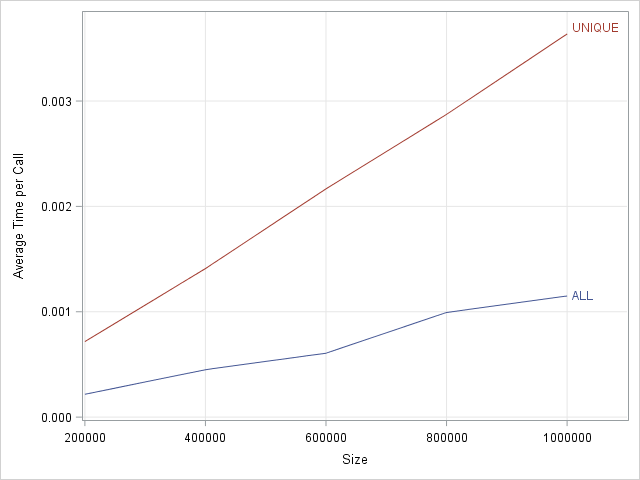 In terms of absolute time, both methods require only a few milliseconds. In relative terms, however, the ALL method is much faster, and the relative difference increases as the size of the data increases.

Notice that the program demonstrates a useful trick. The ALL function runs much faster than the time required to generate a random vector with a million elements. Therefore the time required to generate a vector and determine whether it is constant is dominated by generating the data. To estimate ONLY the time spent by the ALL and UNIQUE functions, you can either pre-compute the data or you can estimate how long it takes to generate the data and subtract that estimate from the total time. Because this particular test requires generating 300 vectors with 1 million elements, pre-computing and storing the vectors would require a lot of RAM, therefore I used the estimation trick.

In conclusion, when you are timing an algorithm in a vector-matrix language, follow the best practices in this article. The most important tip is to call the method multiple times and plot the average (as I have done here) or plot the distribution of times (not shown). Plotting the average gives you an estimate for the expected time whereas plotting the distribution enables you to estimate upper and lower bounds on the times.

SAS/IML programmers can find additional examples of timing performance in the following articles: