In a recent article on efficient simulation from a truncated distribution, I wrote some SAS/IML code that used the LOC function to find and exclude observations that satisfy some criterion. Some readers came up with an alternative algorithm that uses the REMOVE function instead of subscripts. I remarked in a comment that it is interesting to compare the relative efficiency of matrix subscripts and the REMOVE function, and that Chapter 15 of my book Statistical Programming with SAS/IML Software provides a comparison. This article uses the TIME function to measure the relative performance of each method.

The task we will examine is as follows: given a vector x and a value x0, return a row vector that contains the values of x that are greater than x0. The following two SAS/IML functions return the same result, but one uses the REMOVE function whereas the other uses the LOC function and subscript extraction:

To test the relative performance of the two functions, create a vector x that contains one million normal variates. By using the QUANTILE function, you can obtain various cut points so that approximately 1%, 5%, 10%,...,95%, and 99% of the values will be truncated when you call the functions:

You can use the SGPLOT procedure to plot the time that each function takes to extract 1%, 5%, ..., 95%, and 99% of data. In addition, you can smooth the performance by using a loess curve: 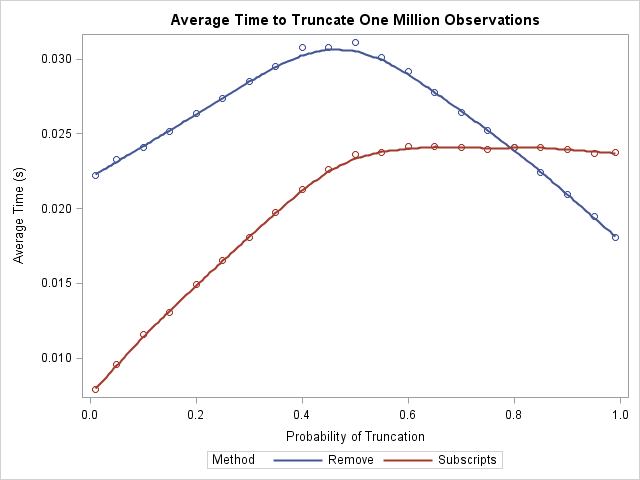 What does this exercise tell us? First, notice that the average time for either algorithm is a few hundredths of a second, and this is for a vector that contains a million elements. This implies that, in practical terms, it doesn't matter which algorithm you choose! However, for people who care about algorithmic performance, the LOC-subscript algorithm outperforms the REMOVE function provided that you truncate less than 80% of the observations. When you truncate 80% or more, the REMOVE function has a slight advantage.