A chi-square test for association in SAS

You can create the data by using the following DATA step, then call PROC FREQ to analyze the association between the response variable and gender.

As explained in the PROC FREQ documentation, the Pearson chi-square statistic indicates an association between the variables in the 2 x 2 table. The results show that the chi-square statistic (for 1 degree of freedom) is 4.8, which corresponds to a p-value of 0.0285. The test indicates that we should reject the null hypothesis of no association at the 0.05 significance level.

As stated in the SAS Usage Note, this association test is equivalent to a Z test for whether the proportion of males who responded "Yes" equals the proportion of females who responded "Yes." The equivalence relies on a fact from probability theory: a chi-square random variable with 1 degree of freedom is the square of a random variable from the standard normal distribution. Thus the square root of the chi-square statistic is the Z statistic (up to a sign) that you get from the test of equality of two proportions. Therefore the Z statistic should be z = ±sqrt(4.8) = ±2.19. The p-value is unchanged.

Z test for the equality of two proportions: A SAS DATA step implementation

For comparison, you can implement the classical Z test by applying the formulas from a textbook or from the course material from Penn State, which includes a section about comparing two proportions. The following DATA step implements the Z test for equality of proportions:

There is actually a direct way to test for the equality of two independent proportions: use the RISKDIFF option in the TABLES statement in PROC FREQ. In the documentation, binomial proportions are called "risks," so a "risk difference" is a difference in proportions. (Also, a "relative risk" (the RELRISK option) measures the ratio of two proportions.) Equality of proportions is equivalent to testing whether the difference of proportions (risks) is zero.

As shown in the documentation, PROC FREQ supports many options for comparing proprtions. You can use the following suboptions to reproduce the classical equality of proportions test:

Combining these options gives the following direct computation of the difference between two proportions: 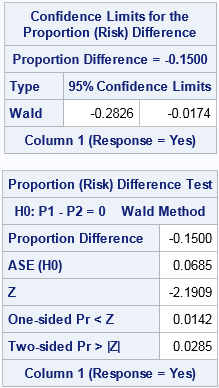 The second table shows the result of the Wald equality test. The "ASE (H0)" row gives the estimate for the (asymptotic) standard error, assuming the null hypothesis. The Z score and the two-sided p-value match the values from the DATA step computation, and the interpretation is the same.

In summary, the SAS Usage Note correctly states that the chi-square test of association is equivalent to the Z test for the equality of proportion. To run the Z test explicitly, this article uses the SAS DATA step to implement the test when you have summary statistics. As promised, the Z statistic is one of the square roots of the chi-square statistic and the p-values are the same. The DATA step removes some of the mystery regarding the equivalence between these two tests.

However, writing DATA step code cannot match the convenience of a procedure. For raw or pre-summarized data, you can use the RISKDIFF option in PROC FREQ to run the same test (recast as a difference of proportions or "risks"). To get exactly the same confidence intervals and statistics as the classical test (which is called the Wald test), you need to add a few suboptions. The resulting output matches the DATA step computations.