If you toss a coin 28 times, you would not be surprised to see three heads in a row, such as ...THHHTH.... But what about eight heads in a row? Would a sequence such as THHHHHHHHTH... be a rare event?

This question popped into my head last weekend as I attended my son's graduation ceremony. As the students marched in, I noticed that men were dressed in green cap and gowns, whereas the women were dressed in white. They entered in alphabetical order, which randomized the men and women. They filed into 12 rows that each contained 28 seats. Thus each row is like an independent toss of a coin, with green and white representing heads and tails, respectively.

When the students entered the ninth row from the left (fourth from the right), I noticed a sequence of eight consecutive "little green men," which is highlighted in red in the picture on this page. (Click to enlarge.) I wish I had a photo of the students seated in their chairs because the effect is more dramatic when the green mortarboards are all aligned. But take my word for it: the long sequence of green was very noticeable.

You can simulate the students by generating 336 random binary values arranged on a 12 x 28 grid. Since this was the graduating class of 2017, I used 2017 as the random number seed in the following DATA step: 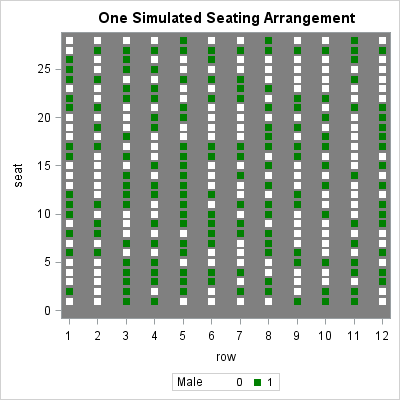 If you look at row 5 in the image, you will see a sequence of nine consecutive green markers. The fact that a simulated data set reproduced the graduation scenario on the very first attempt makes me think that this situation is not very rare. However, changing the seed a few times shows that the situation does not always occur.

A sequence of consecutive events is also called a "run" of events. If you do an internet search for "probability of k heads in a row" or "probability of runs in coin toss", you will find many solutions to this problem. The source I used is a question that was asked on StackExchange about "blocks of events." Whereas many people approach this problem by using a simulation or an explicit recursive mathematical formula, "Neil G" and "COOLSerdash" compute the probability by using a Markov transition matrix, which is easy to create in the SAS/IML matrix language.

The following statements define a function that creates the Markov transition matrix and iterates it to compute the probability that coin will show k consecutive heads in N tosses. The program works for any probability of heads, not merely p=0.5. See the StackExchange article for the explanation:

In summary, graduation events can be long, but computing the probabilities of interesting arrangements of the students can help make the time go faster! I wasn't able to compute the probabilities in my head while at the graduation, but it didn't take long to research the problem and solve it with SAS after I got home. I conclude that observing a long sequence of men in a randomized seating arrangement that has 12 rows of 28 seats is not a rare event. In fact, the chance of observing a run of eight or more men is about 64%.

The real lesson for all of us is that we should keep our eyes open and look around. Math and statistics are everywhere!