At SAS Global Forum last week, I saw a poster that used SAS/IML to optimized a quadratic objective function that arises in financial portfolio management (Xia, Eberhardt, and Kastin, 2017). The authors used the Newton-Raphson optimizer (NLPNRA routine) in SAS/IML to optimize a hypothetical portfolio of assets. 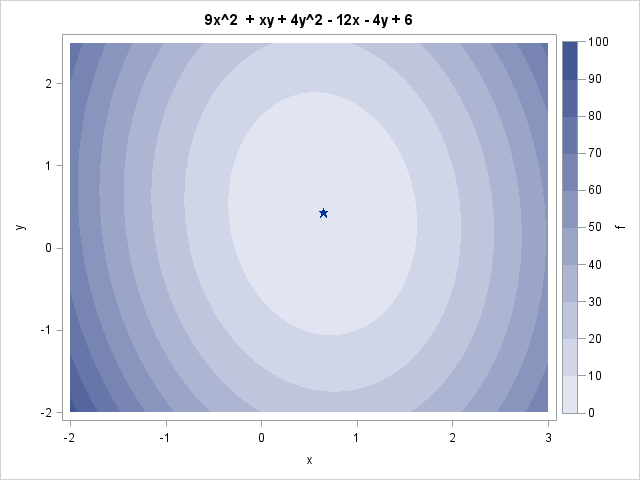 The NLPQUA subroutine enables you to specify the Hessian matrix and the linear coefficients. From those values, the routine uses an efficient solver to find the global minimum of the quadratic polynomial, which occurs at x=92/143, y=60/143:

If you have access to SAS/OR software, PROC OPTMODEL provides a simple and natural language for solving simple and complex optimization problems. For this problem, PROC OPTMODEL detects that the objective function is quadratic and automatically chooses an efficient QP solver. Here is one way to solve the unconstrained and constrained problems in PROC OPTMODEL. The answers are the same as before and are not shown.

In summary, if you want to optimize a quadratic objective function (with or without constraints), use the NLPQUA subroutine in SAS/IML, which is a fast and efficient way to maximize or minimize a quadratic function of many variables. If you have access to SAS/OR software, PROC OPTMODEL provides an even simpler syntax.