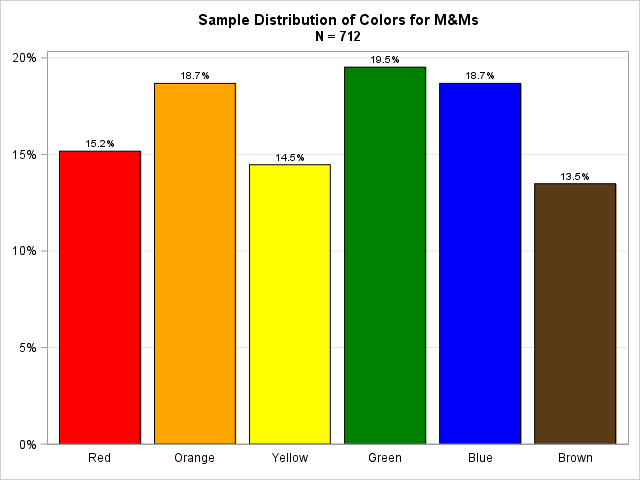 M&M's® have a long history at SAS. SAS is the world’s largest corporate consumer of M&M's. Every Wednesday a SAS employee visits every breakroom on campus and fill two large containers full of M&M's. This article uses SAS software to analyze the classic "distribution of colors" experiment.

The proportion of colors for M&M's

The "plain" M&M candies (now called "milk chocolate M&M's") are produced by the Mars, Inc. company. The distribution of colors in M&M's has a long and colorful history. The colors and proportions occasionally change, and the distribution is different for peanut and other varieties. A few incidents from my lifetime that made the national news are:

The breakroom containers at SAS are filled from two-pound bags. So as to not steal all the M&M's in the breakroom, I conducted this experiment over many weeks in late 2016 and early 2017, taking one scoop of M&M's each week. The following data set contains the cumulative counts for each of the six colors in a sample of size N = 712:

A bar chart that shows the observed distribution of colors in M&M's is shown at the top of this article.

To estimate the proportion of colors in the population, simply divide each count by the total sample size, or use the FREQ procedure in SAS. PROC FREQ also enables you to run a chi-square test that compares the sample counts to the expected counts under a specified distribution. The most recent published distribution is from 2008, so let's test those proportions: 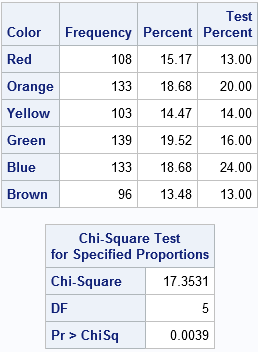 The observed and expected proportions are shown in the table to the right. The chi-square test rejects the test hypothesis at the α = 0.05 significance level (95% confidence). In other words, the distribution of colors for M&M's in this 2017 sample does NOT appear to be the same as the color distribution from 2008! You can see this visually from the bar chart: the red and green bars are too tall and the blue bar is too short compared with the expected values.

You need a large sample to be confident that this empirical deviation is real. After collecting data for a few weeks, I did a preliminary analysis that analyzed about 300 candies. With that smaller sample, the difference between the observed and expected proportions could be attributed to sampling variability and so the chi-square test did not reject the null hypothesis. However, while running that test I noticed that the green and blue colors accounted for the majority of the difference between the observed and theoretical proportions, so I decided to collect more data.

As I explained in a previous article, you can use the sample proportions to construct simultaneous confidence intervals for the population proportions. The following SAS/IML statements load and call the functions from the previous post: 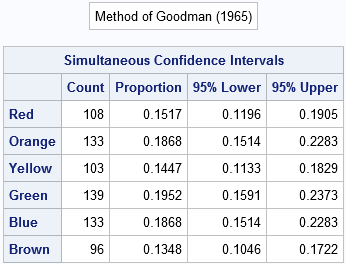 From reading previous articles, I know that the Customer Care team at M&M/Mars is very friendly and responsive. Apparently they get asked about the distribution of colors quite often, so I sent them a note. The next day they sent a breakdown of the colors for all M&M candies.

Interestingly, plain (and peanut) M&M's are now produced at two different factories in the US, and the factories do not use the same mixture of colors! You need to look on the packaging for the manufacturing code, which is usually stamped inside a rectangle. In the middle of the code will be the letters HKP or CLV. For example, the code might read 632GCLV20.

Although I did not know about the manufacturing codes when I collected the data, I think it is clear that the bulk of my data came from the CLV plant. You can create a graph that shows the sample proportions, the 95% simultaneous confidence intervals, and vertical hash marks to indicate the CLV population parameters, as follows: 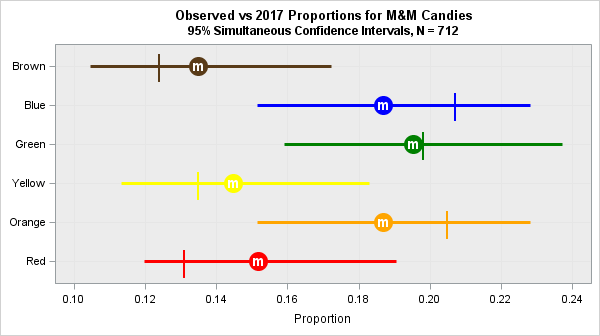 The graph shows that the observed proportions are close to the proportions from the CLV plant. All proportions are well within the 95% simultaneous confidence intervals from the data. If you rerun the PROC FREQ chi-square analysis with the CLV proportions, the test does not reject the null hypothesis.

The experimental evidence indicates that the colors of plain M&M's in 2017 do not match the proportions that were published in 2008.

After contacting the M&M/Mars Customer Care team, I was sent a new set of proportions for 2017. The color proportions now depend on where the candies were manufactured. My data matches the proportion of colors from the Cleveland plant (manufacturing code CLV).

If you are running this analysis yourself, be sure to record whether your candies came from the HKP or CLV plant. If you want to see my analysis, you can download the complete SAS program that analyzes these data.

Educators who use M&M's to teach probability and statistics need to record the manufacturing plant, but this is still a fun (and yummy!) experiment. What do you think? Do you prefer the almost-equal orange-blue-green distribution from the CLV plant? Or do you like the orange-blue dominance from the HKP plant? Or do you just enjoy the crunchy shell and melt-in-your-mouth goodness, regardless of what colors the candies are?