My son is taking an AP Statistics course in high school this year. AP Statistics is one of the fastest-growing AP courses, so I welcome the chance to see topics and techniques in the course. Last week I was pleased to see that they teach data exploration techniques, such as using an ogive (rhymes with "slow jive") to approximate the cumulative distribution of a set of univariate data. This article shows how you can create an ogive by using SAS procedures.

What is an ogive?

An ogive is also called a cumulative histogram. You can create an ogive from a histogram by accumulating the frequencies (or relative frequencies) in each histogram bin. The height of an ogive curve at x is found by summing the heights of the histogram bins to the left of x.

Ogives are not used much by professional statisticians because modern computers make it easy to compute and visualize the exact empirical cumulative distribution function (ECDF). However, if you are a student learning to analyze data by hand, an ogive is an easy way to approximate the ECDF from binned data. They are also important if you do not have access to the original data, but you have a histogram that appeared in a published report. (See "How to approximate a distribution from published quantiles.")

Create an ogive from a histogram

To demonstrate the construction of an ogive, let's consider the distribution of the MPG_CITY variable in the Sashelp.Cars data set. This variable contains the reported fuel efficiency (in miles per gallon) for 428 vehicle models. The following call to PROC UNIVARIATE in Base SAS uses the OUTHIST= option in the HISTOGRAM statement to create a data set that contains the frequencies and relative frequencies of each bin. By default, the frequencies are reported for the midpoints of the intervals. To create an ogive you need the endpoints of each bin, so use the ENDPOINTS option as follows: 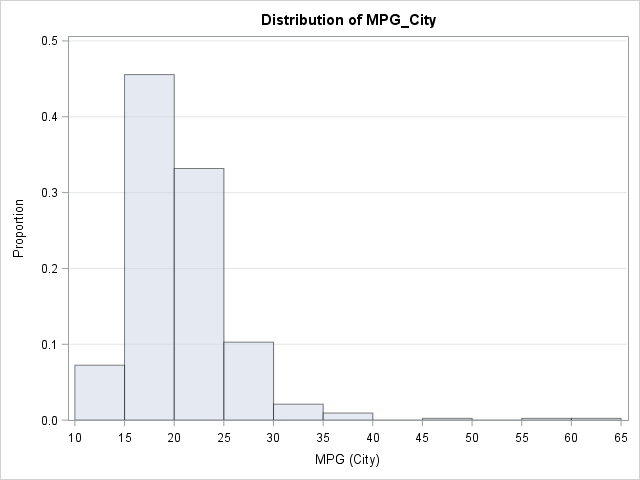 The histogram shows that most vehicles get between 15 and 25 mpg in the city. The distribution is skewed to the right, with a few vehicles getting as much as 59 or 60 mpg. A few gas-guzzling vehicles get less than 15 mpg.

Create an ogive from the output of PROC UNIVARIATE

Consequently, to construct an ogive from the OUTHIST= data set, you can do the following:

The following SAS DATA step carry out these adjustments: 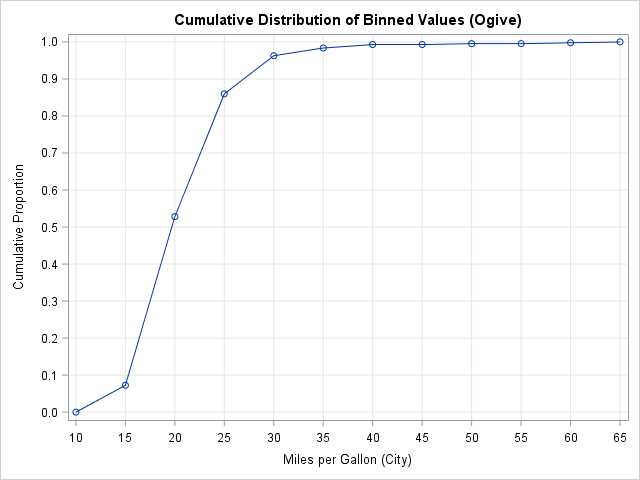 You can use the graph to estimate the percentiles of the data. For example:

Compare an ogive to an empirical cumulative distribution

You might wonder how well the ogive approximates the empirical CDF. The following graph overlays the ogive and the ECDF for this data. You can see that the two curves agree closely at the ogive values, shown by the markers. However, there is some deviation because the ogive assume a linear accumulation (a uniform distribution) of data values within each histogram bin. Nevertheless, this coarse piecewise linear curve that is based on binned data does a good job of showing the basic shape of the empirical cumulative distribution. 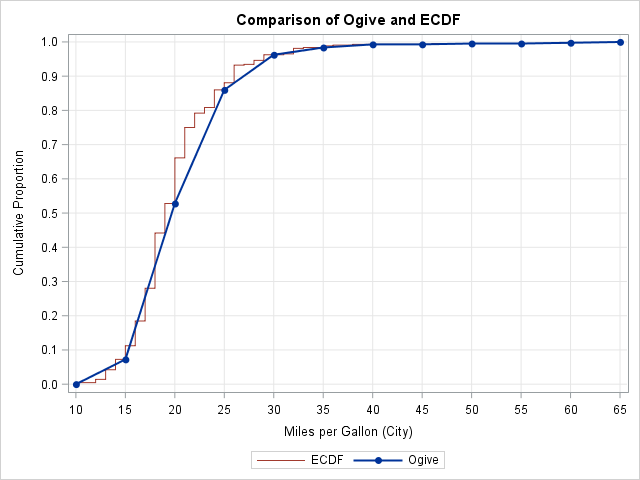