A grid is a set of evenly spaced points. You can use SAS to create a grid of points on an interval, in a rectangular region in the plane, or even in higher-dimensional regions like the parallelepiped shown at the left, which is generated by three vectors. You can use vectors, matrices, and functions in the SAS/IML language to obtain a grid in a parallelepiped.

Evenly spaced points in an interval

In one dimension, you can use a DO loop in the SAS DATA step to construct evenly spaced points in an interval. In the SAS/IML language, you can construct a vector of evenly spaced values operation without writing a DO loop. You can use the DO function, or you can use the colon operator (which SAS/IML documentation calls the "index creation operator"). The results are equivalent, as shown in the following program:

The second method generalizes to any linear subspace. For example, suppose you are given a vector u with magnitude α = ||u||. Then the following SAS/IML statements create points that are evenly spaced points along the vector u. The magnitudes of the N vectors are 0, α/N, 2α/N, and so forth up to α.

Grids in a linear subspace

In fact, with the help of linear algebra, the EXPANDGRID function enables you to construct a grid in any linear subspace. Recall that a linear subspace is the "span," or set of all linear combinations, of k basis vectors.

To give a concrete example, consider a rectangular grid of points in the square [0,1]x[0,1]. In the following SAS/IML program, the rows of the matrix G contain the grid points. You can think of each row as being a set of coefficients for a linear combination of the basis vectors e1 and e2. You can use those same coefficients to form linear combinations of any other basis vectors. The program shows how to form a grid in the two-dimensional linear subspace that is spanned by the vectors u = { 3 2 1} and v = {-3 5 2}: 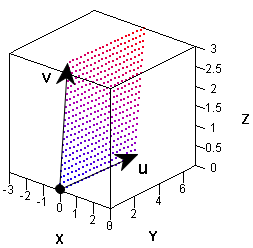 In the graph, the three-dimensional vectors u and v are indicated. The grid of points is a set of linear combinations of the form (i/N) u + (j/N) v, where 0 ≤ i, j ≤ N. The grid lies on a two-dimensional subspace spanned by u and v. The points in the grid are colored according to the values of the third component: blue points (lower left corner) correspond to low z-values whereas red points (upper right corner) correspond to high z-values.

Grids are important for visualizing multivariate functions. The function in this example is linear, but grids also enable you to visualize and understand nonlinear transformations.