Today is my 500th blog post for The DO Loop. I decided to celebrate by doing what I always do: discuss a statistical problem and show how to solve it by writing a program in SAS.

These formulas establish a one-to-one (and therefore invertible) relationship between the central moments (means and standard deviations) of the normal and lognormal distributions. If you have the lognormal parameters (m, sqrt(v)), you can compute the corresponding normal parameters, and vice versa. The formulas for μ and σ as functions of m and v are μ = ln(m2 / φ) and σ = sqrt( ln(φ2 / m2) ) where φ = sqrt(v + m2). You can think of these formulas as defining a function, F, that maps (m, sqrt(v)) values into (μ, σ) values. 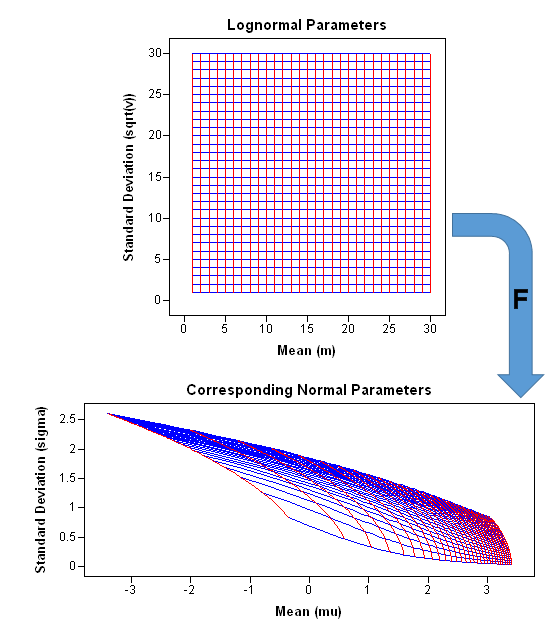 What does this mapping tell us about the relationship between the central moments of the normal and lognormal distributions? What is the geometry of the transformation that maps one set of means and standard deviations to the other?

If F is the function that gives (μ, σ) as a function of (m, sqrt(v), you can visualize F by using the graphic to the left. (Click to enlarge.) The grid in the upper part of the picture represents a uniform mesh [1,30] x [1,30] in the domain of F. These are means and standard deviations for lognormal distributions. Vertical lines (m is constant) are drawn in red; horizontal lines (v is constant) are drawn in blue. The corresponding (μ, σ) values (the image of the grid under F) are shown in the bottom part of the picture. The bottom picture shows the mean and standard deviation of the corresponding normal distributions.

By looking at the scale of the graphs, you can see that the transformation is highly contractive on this domain. The function maps a huge rectangle (841 square units) into a little wing-shaped region whose area is about 11 square units. The contraction is especially strong when the lognormal parameters m and v are large. For example the entire right half of the grid in the domain of F (where m ≥ 15) is mapped into a tiny area near (μ,σ)=(3,0.5) in the range.

This fact is not too surprising because the inverse mapping (F–1) is exponential, and therefore highly expansive. Nevertheless, it is illuminating to see the strength of the contraction. For example, the following graphic "zooms in" on an area of the domain that is centered near the point (m, sqrt(v)) = (22.5, 11.5), which is the approximate pre-image of (μ, σ) = (3, 0.5). The parallelogram in the domain of F is mapped to a tiny square that is centered near (μ, σ) = (3, 0.5). On this scale, the mapping is well-approximated by its linearization, which is the Jacobian matrix of first derivatives. The determinant of the Jacobian matrix at the point (m, sqrt(v) = (22.5, 11.5) is about 1/600, which means that the big parallelogram on the left has about 600 times the area of the tiny square on the right. (In the illustration, the square is not drawn to scale.) 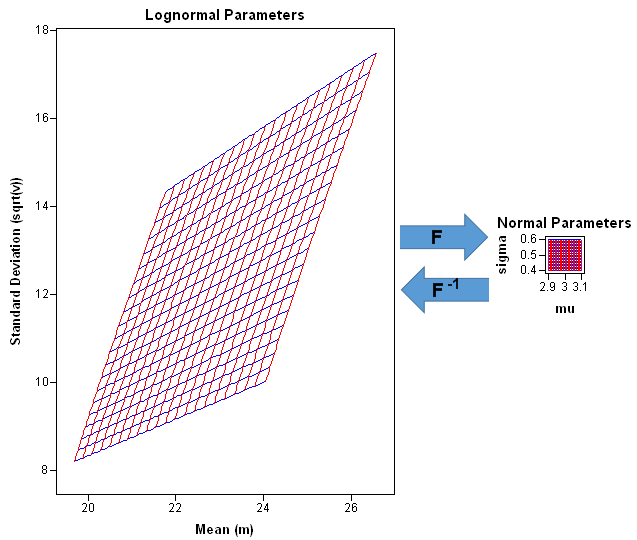 For simplicity, this discussion focused on parameter values near (μ, σ)=(3, 0.5), but you can use the same ideas and pictures to study other regions of parameter space. Moreover, the same ideas apply to other data transformations.

The grids in the graphs were created by using the EXPANDGRID function that I discussed in the article how to generate a grid of points in SAS. It is easy to apply the transformation to the grid: 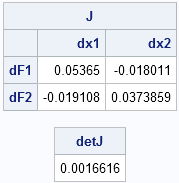 This article—my 500th blog post—provides a good example of what I try to accomplish with my blog. The problem was inspired by a question from a SAS customer. I analyzed it by writing a SAS/IML program. The analysis requires applications of statistics, multivariate analysis, geometry, and matrix computations. I created some cool graphs. Thanks for reading.