Counting is the simplest analysis of any data (missing or otherwise). For each variable, how many observations are missing? You can then proceed to more complex analyses. Do two variable share a similar missing value pattern? Can you predict that one variable will be missing if you know that another variable is missing?

This article shows a simple way to examine patterns of missing values in SAS. The example data is the Sashelp.Heart data set, which contains information about patients in the Framingham Heart Study. The meaning of most variables is evident from the variable's name. An exception is the MRW variable, which contains a patient's "Metropolitan Relative Weight." The MRW is a percentage of the patient's weight to an ideal weight. Thus an MRW score of 100 means "ideal weight" whereas a score of 150 means "50% heavier than ideal." The MRW is similar to the more familiar body-mass index (BMI).

The number of missing values for each variable

I have previously shown how to use PROC FREQ to count the number of missing values for numeric and character variables. The technique uses a custom format to classify each value as "Missing" or "Not Missing." 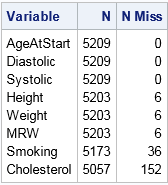 The MI procedure in SAS/STAT software is used for multiple imputation of missing values. PROC MI has an option to produce a table that summarizes the patterns of missing values among the observations. The following call to PROC MI uses the NIMPUTE=0 option to create the "Missing Data Patterns" table for the specified variables:

The first row counts the number of complete observation. There are 5039 observations that have no missing values.

This preliminary analysis has provided important information about the distribution of missing data in the Sashelp.Heart data set. Most patients (96.7%) have complete data. The most likely measurement to be missing is Cholesterol, followed by information about whether the patient smokes. You can see exactly how many patients are missing Height measurements, Weight measurements, or both. It is obvious that the MRW variable has a missing value if and only if the Weight variable is missing.