An example is shown below. The data set is the Sashelp.Cars data, which contains information on car and trucks. The first scatter plot displays a scatter plot where each marker is colored according to the value of the Origin variable, which has the values "Asia," "Europe," and "USA." The second scatter plot uses the WHERE statement to restrict the display to vehicles that were manufactured in the USA. For simplicity, only the most important statements are shown. You can download the complete SAS program that generates these graphs.

The graphs look the way they do because the SG procedures follow certain rules for displaying grouped versus non-grouped data. The first graph has three groups. The GROUP= option causes the SGPLOT procedure to assign the ODS element GraphData1 to the first group of markers ("Asia"). Similarly, the ODS element GraphData2 is assigned to the second group ("Europe") and the GraphData3 element is assigned to the third group ("USA"). (These names are described in the documentation for ODS style elements.) In the HTMLBlue style, which is the style used for these graphs, each markers is colored a shade of blue, red, or green according to its group membership.

If you are displaying both graphs, you would certainly want the markers in the second graph to use the same shade of green as the "USA" vehicles in the first graph. This shade of green does not have a standard name, so you cannot specify a hard-coded color such as MARKERATTRS=(color=DarkGreen). Instead, use the MARKERATTRS= option to specify the marker attributes in the GraphData3 element, as follows: 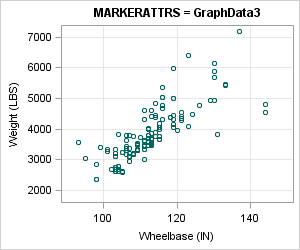 The MARKERATTRS= option tells the scatter plot to use markers that have the color, symbol, and size of the GraphData3 style element. For the default HTMLBlue style, that means dark green and open circles, as shown. 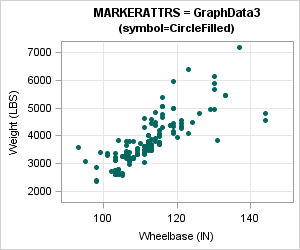 Voila! The task is complete. The second plot now has the same marker attributes as the first plot. ( View the plots side by side.) If you were to change the ODS style from HTMLBlue to some other style, the colors would still match.

Notice that PROC SGPLOT does not support specifying the color by using the name of the style element. For example, the following is invalid in PROC SGPLOT:

The Graph Template Language (GTL) supports specifying style elements using the "colon notation," but that syntax is not supported in the SG procedures.

The SAS documentation contains two sections that explain ODS style elements and how to use them in the SG procedures:

As indicated above, the same ideas apply to line attributes, region attributes, and so forth. For example, in a SERIES statement you can use LINEATTRS=GraphFit2(thickness=3) to assign attributes of the GraphFit2 style and ovverride the THICKNESS attribute.

Thanks to Sanjay Matange and Dan Heath for several discussions that improved my understanding of ODS style elements and attributes.