The DATA step method I used in that previous article was a brute force method called the "direct method." This article shows how to simulate multinomial data in the DATA step by using a more efficient algorithm.

The direct method constructs each multinomial observation by simulating the underlying process, which can be thought of as drawing N balls (with replacement) from an urn that contains balls of k different colors. The parameters to the multinomial distribution are N (the number of balls to draw) and (p1, p2, ..., pk), which is a vector of probabilities. Here pi is the probability of drawing a ball of the ith color and Σi pi = 1.

If N is large or you plan to generate a large number of observations, there is a more efficient way to simulate multinomial data in the SAS DATA step. It is called the "conditional method" and it uses the fact that you can think of a multinomial draw as being a series of binomial draws (Gentle, 2003, pp. 198-199). 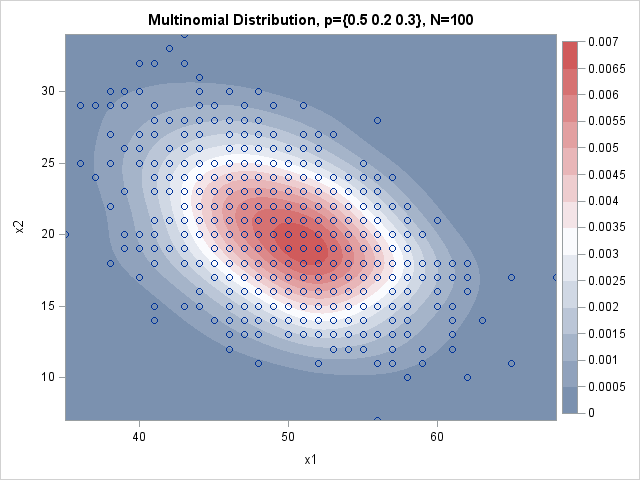 Whereas the direct method requires an inner DO loop that performs N iterations, the conditional method only requires k iterations, where k is the number of categories being drawn. In the example, N=100, whereas k=3. The direct method must generate 100,000 values from the "Table" distribution, whereas the conditional method generates 3,000 values from the binomial distribution.

The graph shows 1,000 observations from the multinomial distribution with N=100 and p={0.5, 0.2, 0.3}. Because of overplotting, you cannot see all 1,000 observations, so the scatterplot is overlaid on a kernel density estimate. The graph shows the counts for the first two categories; the third count is determined by the fact that the counts sum to 100. Notice that the distribution of counts is centered near the expected values x1=50 and x2=20.

In summary, if you want to simulate multinomial data by using the SAS DATA step, the algorithm in this article is more efficient than the brute-force direct computation. This algorithm simulates a multinomial vector conditionally as a series of binomial draws.