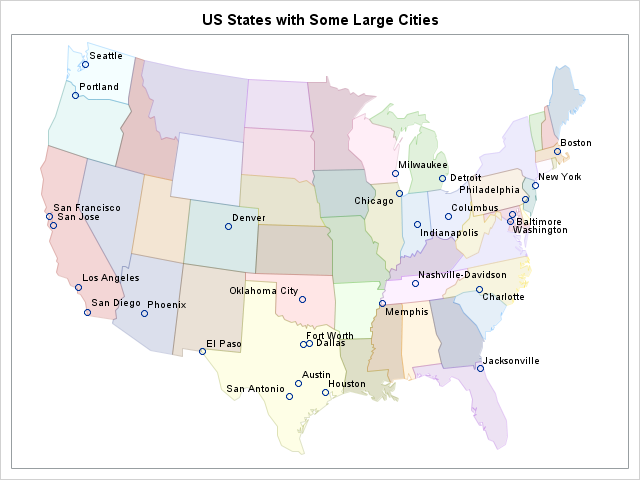 Did you know that you can use the POLYGON statement in PROC SGPLOT to draw a map? The graph at the left shows the 48 contiguous states of the US, overlaid with markers that indicate the locations of major cities. The plot was created by using the POLYGON statement, which was introduced in SAS 9.4m1.

You need to look carefully at Sanjay's program to see how he constructs an ID variable that identifies each polygon. For map data, it is common for regions to be defined in a nested hierarchical manner. For example, the MAPS.US data set that is distributed with SAS/GRAPH software has two variables (STATE and SEGMENT) that together define the polygons that make up the map of US states. (For example, Michigan has two segments that correspond to Lower Peninsula and the Upper Peninsula.) Sanjay uses a standard trick that concatenate multiple variable values into a single ID variable, and uses the concatenated values to identify each polygon. 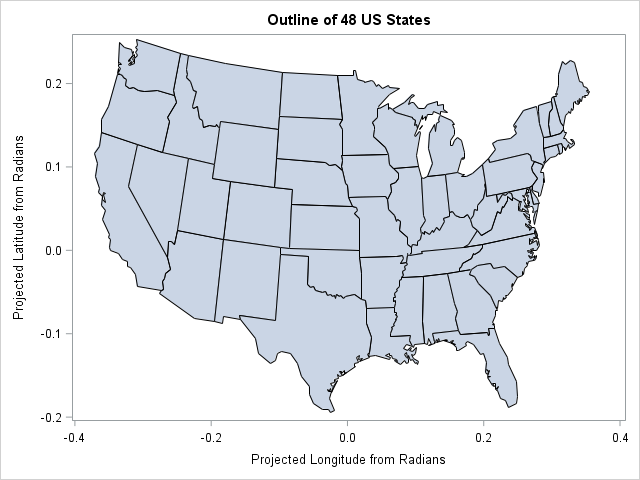 Notice that the MAPS.US data set uses projected radians as the coordinates for the state boundaries. You can multiply these values by 180/π to convert to degrees. You can use the GPROJECT procedure in SAS/GRAPH software to project data sets that provide longitude and latitude variables.

You can overlay data on a polygon plot. In particular, you can use the BUBBLE, TEXT, SCATTER, and VECTOR statements, as well as additional POLYGON statements to overlay additional spatial information on a map. The following DATA step reads the coordinates of a few large cities from the MAPS.USCITY data set and concatenates that information with the state-boundary data. The SCATTER statement overlays the cities and labels them.

The graph is shown at the top of this article. Notice that the GROUP= option in the POLYGON statement is used to color each state.

The SGPLOT procedure does not replicate the functionality of the SAS/GRAPH software. The mapping procedures in SAS/GRAPH software (which includes GREDUCE, GPROJECT, GMAP, and MAPIMPORT) enable you to manipulate and visualize map data in more complex ways. However, the POLYGON statement in PROC SGPLOT enables you to create some simple maps that visualize countries, states, and counties, and to overlay graphical elements by using other SGPLOT statements.