When you create a histogram with statistical software, the software uses the data (including the sample size) to automatically choose the width and location of the histogram bins. The resulting histogram is an attempt to balance statistical considerations, such as estimating the underlying density, and "human considerations," such as choosing "round numbers" for the location and width of bins for histograms. Common "round" bin widths include 1, 2, 2.5, and 5, as well as these numbers multiplied by a power of 10.

The default bin width and locations tend to work well for 95% of the data that I plot, but sometimes I decide to override the default choices. This article describes how to set the width and location of bins in histograms that are created by the UNIVARIATE and SGPLOT procedures in SAS.

Why override the default bin locations?

The most common reason to override the default bin locations is because the data have special properties. For example, sometimes the data are measured in units for which the common "round numbers" are not optimal:

To illustrate these situations, let's manufacture some data with special properties. The following DATA step creates two variables. The T variable represents time measured in minutes. The program generates times that are normally distributed with a mean of 120 minutes, then rounds these times to the nearest five-minute mark. The U variable represents a proportion between 0 and 1; it is uniformly distributed and rounded to two decimal places.

How do we control the location of histogram bins in SAS? Read on!

Custom bins with PROC UNIVARIATE: An example of a time variable

I create histograms with PROC UNIVARIATE when I am interested in also computing descriptive statistics such as means and quantiles, or when I want to fit a parametric distribution to the data. The following statements create the default histogram for the time variable, T: 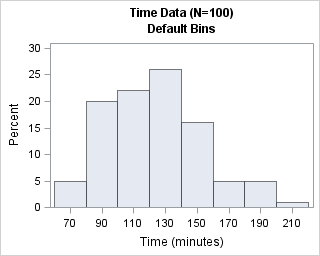 The default bin width is 20 minutes, which is not horrible, but not as convenient as 15 or 30 minutes. The first bin is centered at 70 minutes; a better choice would be 60 minutes.

If you run the SAS statements that create the histogram on the right, you will see the warning message
WARNING: The ENDPOINTS= list was extended to accommodate the data.
This message informs you that you specified the last endpoint as 210, but that additional bins were created to display all of the data.

Custom bins for a bounded variable

As mentioned earlier, if you know that values are constrained within some interval, you might want to choose histogram bins that incorporate that knowledge. The U variable has values that are in the interval [0,1), but of course PROC UNIVARIATE does not know that. The following statement create a histogram of the U variable with the default bin locations: 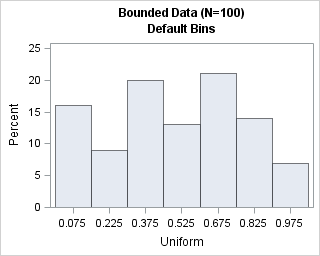 The default histogram shows seven bins with a bin width of 0.15. From a statistical point of view, this is an adequate histogram. The histogram indicates that the data are uniformly distributed and, although it is not obvious, the left endpoint of the first bin is at 0. However, from a "human readable" perspective, this histogram can be improved. The following statements use the MIDPOINTS= and ENDPOINTS= options to create histograms that have bin widths of 0.2 units:

I recommend that you specify both the BINWIDTH= and BINSTART= options, and that you choose the bin width first. Be aware that not all specifications result a valid histogram. If you make a mistake when specifying the bins, you might get the following error
WARNING: The specified BINWIDTH= value will be ignored in order to accommodate the data.
That message usually means that the minimum value of the data was not contained in a bin. For a bin width of h, the BINSTART= value must be less than xmin + h/2, where xmin is the minimum value of the data.

By default, the axis does not show a tick mark for every bin, but you can force that behavior by using the SHOWBINS option. The following statements call the SGPLOT procedure to create histograms for the time-like variable, T. The results are again similar to the custom histograms that are shown in the previous section:

The following statements call the SGPLOT procedure to create histograms for the bounded variable, U. The results are similar to those created by the UNIVARIATE procedure:

In summary, for most data the default bin width and location result in a histogram that is both statistically useful and easy to read. However, the default choices can lead to a less-than-optimal visualization if the data have special properties, such as being time intervals or being bounded. In those cases, it makes sense to choose a bin width and a location of the first bin such that reveals your data's special properties. For the UNIVARIATE procedure, use the MIDPOINTS= or ENDPOINTS= options on the HISTOGRAM statement. For the SGPLOT procedure, use the BINWIDTH= and BINSTART= options to create a histogram with custom bins.